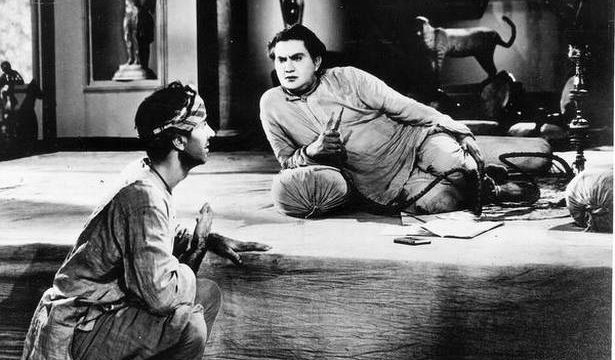 With the discourse around farmers changing over the ongoing protests, what will happen to their traditional portrayal as heroes in the movies?

There was a time, not so long ago, when farmers were lionised as icons, heroes of the nation, as summed up by the slogan Jai Kisan (Glory to Farmers). And as it was in the real world, so too in the reel world, where the mythified farmer-hero has been a mainstay of Indian cinema — a fascinating image that was consciously promoted as recently as the 2000s. But things look murkier in real life now, with the farmers’ protests having been on for more than a year. Internet showdowns have seen farmers vilified as anti-nationals, which leads us to an interesting question: going ahead, can film scripts still be drafted from a farmer’s point of view.? And if so, who will be his opponents — policymakers, private investors, big corporate players?

The reel farmer and his enemies

A village crowd is seated far and wide. There’s not an iota of green anywhere in this vast rocky and barren landscape, where a rather ill-equipped cricket practice is ongoing. It’s Bhuvan the rebel farmer and his desi cricket team, in which the 11th man is namedKachra (trash) revealing blatantly his caste identity as a manual scavenger. Lagaan (2001) is perhaps the most large-scale film in recent public memory that is woven around farmers and taxation. Cricket here is an allegorical tool of resistance to the oppressive colonial government, which had imposed a crippling agricultural tax or lagaan as it was called, and Champaner village takes up an uphill challenge, trying to secure a waiver.

Like Lagaan, a host of films have been made across Indian languages in the past 70 years revolving around the story of the Indian farmer and his beloved zameen, (land), his lost rights and the plight he faces in the face of ‘development’ and debts. An early portrayal was seen in a 1949 Hindi film titled Jeet (The Win). Jeet, the activist heroine, roots for the farmers of her village against both colonial and feudal oppression. She asserts that neither money nor muscle will help the gentry retain the land, and that the government will ensure that it would be distributed equally among the farmers. This film set the discourse, with plots that talk about the farmer’s rights unhesitatingly, situating him as a rightful owner of his land. The story also introduces the government as a facilitating agency to help dismantle the existing colonial-feudal structure of land ownership.

Additionally, a defined villain is created; it could be a human being or a concept. In Jeet, it’s the idea of putting up a factory. In Bimal Roy’s Do Bigha Zameen (The Two Bighas of Land, 1953), a poignant drama immortalised by Balraj Sahni`s performance as Shambhu, a poverty-stricken farmer who is compelled to become a migrant labourer (rickshaw puller), the defined villain is the landlord of the village — Thakur Harnam Singh. In the epic drama Mother India (1957), directed by Mehboob Khan, the bad guy is the moneylender Sukhilala. In Upkar (Charity, 1967), based on the slogan of Jai Jawan, Jai Kisan, it’s the brothers who hold contrasting world views. In Lagaan, the punishing tax is the culprit.

In Tingya (Marathi, 2008) and Peepli Live (2010), more recent films, the cinematic treatments are far more realistic. Both films depict systematic oppression against small and landless farmers. Tingya is set against the backdrop of farmer suicides in Maharashtra’s Vidarbha region. In its opening credits, the film states its dedication “to approximately 131,000 farmers who committed suicides during 1993 to 2006, at a ratio of 9300 a year, 780 a month and 26 a day and the ones who are on the threshold.”

While the flurry of farmer-centric films in Hindi cinema abated after 2001, this was a time when Marathi cinema generated some thought-provoking works centred on the vicious cycle of agrarian debt and rising farmer suicides. As well as Tingya, Gabhricha Paus (The Damned Rain, 2007) and Jhing Chik Jhing (2010) left us pondering the harsh circumstances of an average farmer.

The scene of Shambhu Mahato in Do Bigha Zameen trying to grab a handful of soil from the piece of land he once owned and being shooed away by the guard of the newly constructed factory is still poignant and haunting. The cinematic symbolism of this handful of soil and farmers’ tools in Roy’s film was transformed over next four years into a nationalistic metaphor in the cult film Mother India. Radha, the mother of four played by Nargis, became a representation of the nation as mother. The image in the poster, along with publicity materials of the film, portrayed Radha burdened by the weight of a heavy wooden plough that she carries on her shoulders, a visual that connotes landholders as sacrosanct — giving them the stamp of literal provider as well as national provider. Interestingly, this would become the predominant dimension based on which all big and small farmer films would dwell henceforth; dharti (soil) became the ultimate symbol of loyalty towards the country.

Upkar is a box office success mounted on this rhetoric, describing its farmer heroes as demigods. A relatively newer avatar of this patriotic trope is the NASA-returned non-resident Indian scientist Mohan of Swades (The Motherland, 2004), who quits his high-profile job in the U.S. to return to India and help build a better life for locals.

Unlike these Hindi films, contemporary Marathi releases (Vegali Vaat and Bittersweet, both 2020) and commercially successful Tamil films like Thavam (Penance, 2019) and Bhoomi (Earth, 2021) don’t champion any patriotic agenda. Thavam is a simple short story of three characters, one of whom is a farmers’ rights activist, whereas Bhoomi is marginally on the lines of Swades but deals with a far more progressive and people-oriented story of a scientist who coincidentally experiences a drought while on vacation.

With the farmers’ movement unlikely to find closure anytime soon, will writers and directors attempt to recreate more ‘real farmers’ onscreen as characters beyond the discourse of patriotic vs anti-national, and as people leading their lives and working with dignity as they have in these intermittently produced regional films? That’s the million-dollar question.

The writer is an author and filmmaker.