In a news conference, Ventura County Sheriff’s Sgt. Kevin Donoghue said that the effort had shifted from an attempt to rescue Naya Rivera to an attempt to recover her body. Authorities said Thursday that they believe Glee star Naya Rivera drowned in a Southern California lake, but they are continuing the search for her a day after her 4-year-old son was found alone in a rented boat.

“Investigators believe Rivera drowned in what appears to be a tragic accident,” a Ventura County Sheriff’s Office statement said.

The boy, who was found asleep and wearing a life vest late Wednesday afternoon, told investigators that he and his mother went swimming and he got back on the boat, but “his mom never made it out of the water,” Sheriff’s Sgt. Kevin Donoghue said.

Surveillance video taken at about 1 pm on Wednesday shows Rivera and the boy leaving on the boat at Lake Piru, something she had done before.

“She had experience boating out here at the lake,” Donoghue said.

The boy was discovered by the vendor who rented the boat to the pair. Rivera’s identification and an adult life vest were on the boat, and her car was found in a parking area, Donoghue said.

In a news conference more than 24 hours after the two had set out, Kevin Donoghue said that the effort had shifted from an attempt to rescue the 33-year-old to an attempt to recover her body. 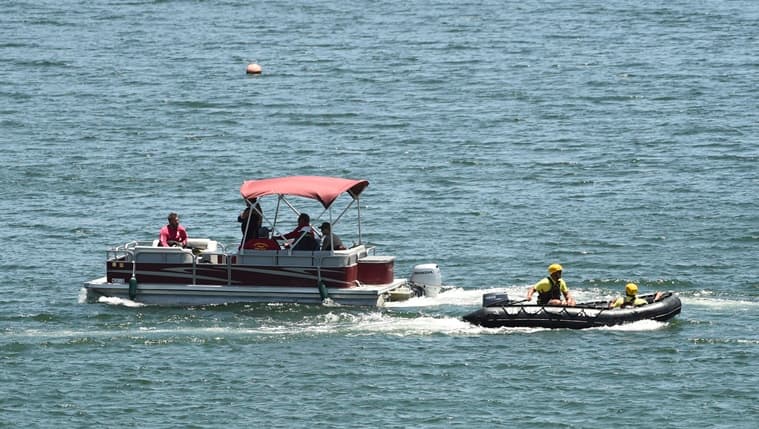 Dozens of people, most of them divers, with help from helicopters, drones and all-terrain vehicles were involved in the search on Lake Piru, 55 miles (90 kilometers) northwest of Los Angeles in the Los Padres National Forest.

In the area where the boat was found, the water was about 30 feet (9 meters) deep, authorities said.

Murky waters heavy with vegetation made it difficult for divers to see more than about a foot ahead of them.

“In the lake, the visibility is terrible,” Donoghue said.

He said the plants proving challenging for divers may have been a problem for Naya Rivera herself.

“If the body is entangled on something beneath the water, it may never come back up,” Donoghue said.

The search was to continue into the night.

The boy, Rivera’s son from her marriage to actor Ryan Dorsey, was safe and healthy and with family members, authorities said. The couple finalized their divorce in June 2018 after nearly four years of marriage.

She called the boy, her only child, “my greatest success, and I will never do any better than him” in her 2016 memoir “Sorry Not Sorry.”

The most recent tweet on Naya Rivera’s account, from Tuesday, read “just the two of us” along with a photo of her and her son.

Rivera played Santana Lopez, a singing cheerleader in 113 episodes of the musical-comedy Glee, which aired on Fox from 2009 until 2015.

It appeared increasingly likely she would become the third major cast member from the show to die in their 30s.

Co-star Mark Salling, who Rivera dated at one point, killed himself in 2018 at age 35 after pleading guilty to child pornography charges.

Cory Monteith, one of the show’s leads, died at 31 in 2013 from a toxic mix of alcohol and heroin.

There have been occasional drownings through the years in the popular recreation area of the lake, which is about an hour’s drive from downtown LA. It was shut down on Thursday for the search. 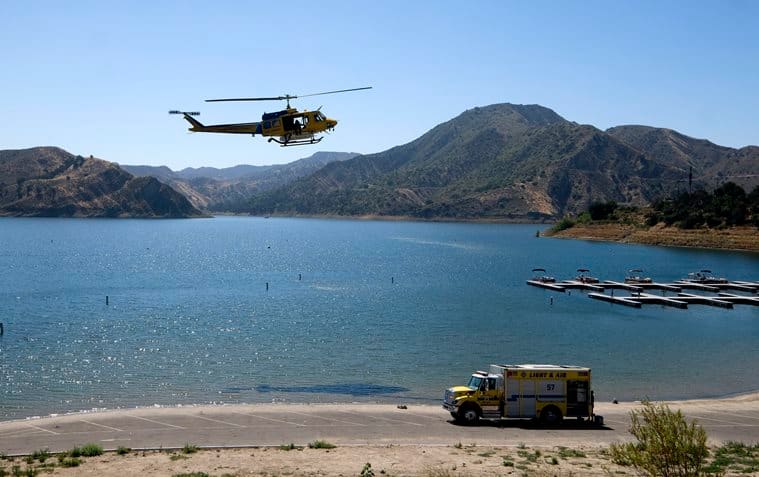 Fire department helicopters hovered over the water on a sunny afternoon in the search’s second day, and boats of several sizes could be seen skimming the water, the smaller ones searching up creeks and tributaries.

Naya Rivera was engaged to rapper Big Sean in 2013, but their relationship ended a year later. The pair met on Twitter and collaborated musically, with the rapper appearing on Rivera’s debut single “Sorry.” She married Dorsey a few months later.

Singer Demi Lovato, who played a Rivera love interest in a guest stint on Glee, posted an Instagram story Thursday morning that showed a candle with the text, “Please pray for @nayarivera to be found safe and sound.”

Other co-stars were expressing similar sentiments on social media.

“We need all the prayers we can get to bring our Naya back home to us,” Heather Morris said on Instagram.

Jackée Harry, who starred in the sitcom The Royal Family with Naya Rivera when Rivera was a child, said on Twitter that “I’ve watched her career blossom ever since. Please God, don’t cut this life short.”

Dan Levy Wins Four Emmys in a Row for ‘Schitt’s Creek’
We and our partners use cookies on this site to improve our service, perform analytics, personalize advertising, measure advertising performance, and remember website preferences.Ok