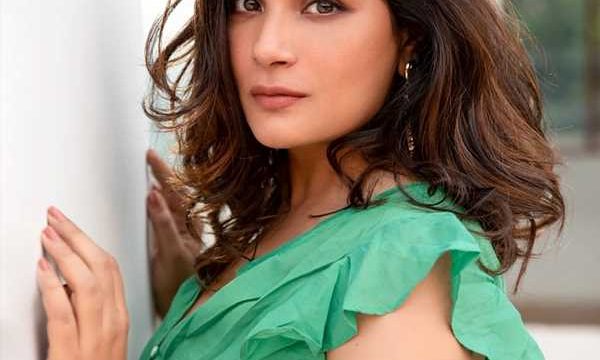 Richa Chadha plays a policewoman investigating the mysterious killings of students in a town nestled up in the mountains of Uttarakhand in her latest Web series, Candy.

“All my characters have been quite unusual. I do not think I related to any one of them,” Richa tells Rediff.com Contributor Mohnish Singh. This is the first time you are playing a cop. How did you prepare for the role?

I met and interacted with a few policewomen as part of my preparation for the role.

I tried to understand the kind of pressure they go through — the pressure of juggling both office and household responsibilities.

I also tried to study their body language and felt that when they are in their uniforms, they stand stiff because the fabric is hard.

So I tried to follow that a little bit and talked to them and tried to find out what is the reality of their lives because the characters of policemen and women are written in a very unidimensional way. After interacting with them, I found out they are quite humane and nice.

Do you prefer taking on characters that are completely different from you, or do you also enjoy playing someone similar to you?

I think some amount of stereotyping happens when you enter the industry.

When films become successful, people want to see you in more of those roles.

It does not happen just to me; it happens to everyone.

To certain extent, that has happened to me.

But that does not mean that people should draw parallels between the characters that I play and the person that I am.

You are one of those actresses who does not bother about the length of their characters in a project. Where does that confidence stem from?

In which film did you feel my role was small?

That film came out eight years ago. How do you expect people who are not from the industry to break in?

These questions are quite offensive.

On one hand, you say, ‘See what a tiny role she got to play!’ and on the other hand, you will write blogs on nepotism saying how unfair the industry is. And then you will say, ‘You did well in that small part also.’

When we are starting and the kinds of parts that we are choosing, only the press in India writes stuff like, ‘supporting actor, character actor, comedic actor or action hero’.

It is 2021 and we should move past these labels. What of your characters have you related to?

Actually, all my characters have been quite unusual. I do not think I particularly related to any one of them.

When did you know that you wanted to be an actor?

When I was about four.

Had your career not flourished in showbiz, did you have a plan B?

I do not think so.

Yes, I was young and foolish, but I always expected it to work out.

I knew it would work out.

How did you spend your first acting pay cheque?

I do not exactly remember.

Do you remember the moment you realised you were famous?

Actually, I still forget sometimes (that I am famous).

Because I am so much in love with the work that I do, my goal has never been fame.

My goal is for people to remember the characters that I do. Candy also features Ronit Roy in the lead role. How has it been working with him?

He is quite an experienced and successful actor.

The best thing about him is that even at this age, he wants to improvise and give his best shot.

He is always like, ‘No, I want to give one more take. I want to do it differently.’

He is always willing to explore.

He never thinks like, ‘Okay, I am such a big actor. I have such a huge fan following. So, I don’t need to push the envelope every time.’

He does not have that kind of attitude.

How important is it for you that your co-star is equally capable and talented?

It does not happen normally.

If you are lucky, you will have good colleagues.

But very often, it does not happen.

And it is okay.

Sometimes you get complete newcomers to work with. You have to do your job well. It is your job also to make them feel comfortable.

Is there any talent or hobby you have developed over the past lockdown months?

I tried to write.

I am still trying to write; it is a script.

How much importance does social media hold in your life?

I think social media is important for people.

It is important for actors as we have to sort of be available and accessible.

But my life is not held by social media.

There are days when I am busy, and I do not check my phone at all.