Kangana Ranaut’s Twitter account was suspended after a series of incendiary tweets targeted at TMC, which violated rules of the micro-blogging platform. Actor Kangana Ranaut’s Twitter account has been permanently suspended after she commented on the alleged violence in West Bengal following the assembly election results. In a series of provocative tweets, the actor also commented on the victory of the Mamata Banerjee-led Trinamool Congress (TMC) for the third consecutive term in West Bengal. Her Instagram account remains functional.

Responding to the suspension, Kangana told ANI, “Twitter has only proved my point they’re Americans & by birth, a white person feels entitled to enslave a brown person, they want to tell you what to think, speak or do. I have many platforms I can use to raise my voice, including my own art in the form of cinema.” She went on to add, “But my heart goes out to the people of this nation who have been tortured, enslaved, and censored for thousands of years, and still, there is no end to the suffering.”

Commenting on the development, a Twitter spokesperson said as per ANI, “We’ve been clear that we will take strong enforcement action on behavior that has the potential to lead to offline harm. The referenced account has been permanently suspended for repeated violations of Twitter Rules specifically our Hateful Conduct policy and Abusive Behaviour policy.”

The spokesperson said that the rules were applied judiciously, “As explained in our abusive behaviour policy, you may not engage in the targeted harassment of someone, or incite other people to do so. We consider abusive behavior an attempt to harass, intimidate, or silence someone else’s voice.”

The actor retaliated with a video on Instagram titled, “Distressed, beyond words, death of democracy. important message for our government.” She asked for President’s rule in the state in the video. Kangana Ranaut is notorious for her outrageous, no-filter posts on social media.

Earlier, Kangana’s sister Rangoli Chandel’s Twitter account was also suspended for violating the regulations of the platform. Kangana’s account was also restricted for a few hours earlier this year after the actor’s incendiary tweets against the web series Tandav. The tweet was deleted later. 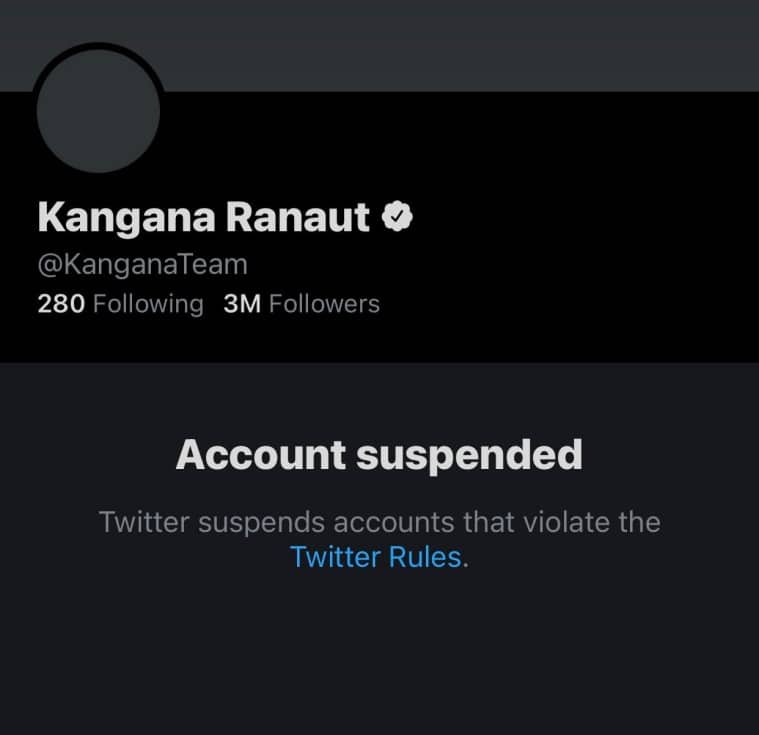 “We take action on any account that violates the Twitter Rules. We welcome people to freely express themselves on our service, however as outlined in our Abusive Behaviour Policy, you may not engage in the targeted harassment of someone, or incite other people to do so,” Twitter had said in a statement to NDTV at that time.

Responding to the move, Bollywood actor Kubbra Sait said the suspension of the account was a permanent relief. She wrote, “Amen! I was in a mental state of tripping her with my left foot if I ever met her. But, this is way better. I hope a permanent relief. Social media can be better without her.”