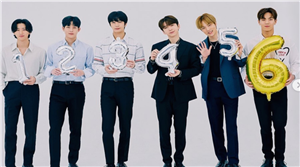 Monsta X just released their latest album, One Of A Kind. As Monsta X release their new album, they appeared on a show to talk about each other and their new song Gambler. Their album, One Of A Kind, released on June 1. On MBC FM4U’s A Song For Hope At Noon With Kim Shin Young, the group spoke about their journey and their music.

As the group had recently celebrated their sixth anniversary, host Kim Shin Young asked them about how long they had stayed together. Minhyuk answered, “If we combine all the time we’ve been together, it’s 10 years since our trainee days. We’re like brothers. Our fans will know, but none of us have sisters. That’s why we’re really like family.”

Kim Shin Young also asked the group to compliment each other, and they obliged, with many laughs. Kihyun told Joohoney, “You write songs well and your dimple is pretty. You’re very good looking these days.” I.M grabbed Hyungwon’s hand and shared, “Do you have cold hands and feet? But your heart is warm. You have unlimited potential.”

Opening up about their new album, One Of A Kind, they said, “The majority of our new songs are written by our members. Over 80 percent is self-composed, so I want to thank our agency staff for opening their minds.”

Joohoney told I.M, “Our Changkyun became sexy, calm, and charismatic. In particular, I was moved by how well the rap was written for Gambler. I hope you become a great composer with better rap in the future.”

Hyungwon praised Minhyuk, saying, “We’ve been together for 10 years, and I want to compliment him because he seems to be growing well into a cool adult. Your front teeth are so pretty when you smile.”

The group ended the conversation and requested the fans to continue showing them love.