Priyanka Chopra was spotted in London with rumoured beau and American singer Nick Jonas late last night. Priyanka who turns 36 today has been generating quite the buzz with her many outings with Jonas.

The global icon of India Priyanka Chopra turns a year older today. While the Quantico actor is away from home, she is celebrating the big day with her family away from home. The actor was spotted in London with rumoured beau and American singer Nick Jonas late last night. Priyanka also shared a photo of a plate with “Happy Birthday Priyanka” written on it. Excited about entering into a new year in life, PeeCee captioned the image as, “And it starts. Yay.”

Priyanka who turns 36 today has been generating quite the buzz with her many outings with Jonas. It was only on Tuesday that her date night with the 25-year-old singer became the talking point on social media. They were accompanied by Jonas’ family including Joe Jonas, Kevin Jonas and Sophie Turner. The photos had Nick and Priyanka leaving the restaurant hand in hand and the Bollywood actor smiling shyly. 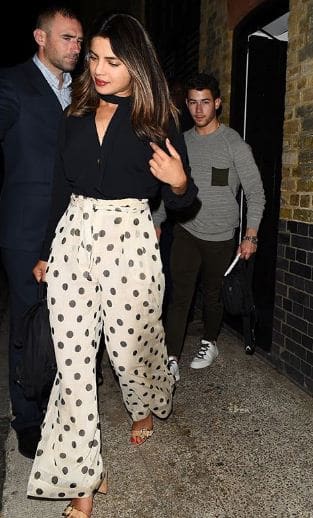 In an interview with People.com, Priyanka Chopra confessed that she is getting to know the singer better. “We’re getting to know each other and I think it was a great experience for him,” she had said on being inquired about her recent trip to India. With many public appearances together, Priyanka and Nick have also fueled rumors about their wedding.

On the work front, Priyanka has two Bollywood projects in hand. She will be seen in Salman Khan starrer Bharat and in Shonali Bose’s The Sky Is Pink along with Farhan Akhtar.