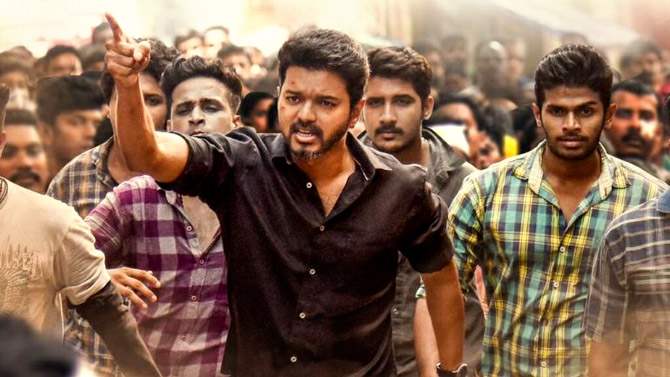 Vijay’s last movie release Mersal became a hit because the BJP protested against it. He should have stuck to that winning formula.

In his new film Sarkar, the actor takes on benami voting as well as the continuous flow of freebies in Tamil Nadu.

There are long-legged lasses shaking a leg with our hero while he sings a Tamil song with English subtitles.

The dialogues also have English subtitles; obviously, the producers are expecting a wider audience.

In all his films, Vijay acts as himself, so you cannot expect variety from him.

But I guess it works for his fans.

The message of the film is benami voting, which is casting someone else’s vote.

Vijay’s Sundar is the highest paid CEO in the world, with a salary of Rs 1,800 crores. We are not told if that’s in rupees or dollars, or if that is a monthly or yearly figure.

He challenges the Election Commission with Section 49P, which states that if someone has falsely voted instead of you, you have to be allowed to vote and that the vote shall be kept in a separate envelope.

After he successfully challenges the Election Commission, 350,000 citizens also complain that their votes were cast by someone else.

That, in fact, is the message of the movie: If someone else has cast your vote, you can still cast it.

What they do with two votes in the same name, we are not told.

Heroine Keerty Suresh has a lovely smile. She gets two songs in the film.

The main villain (Radha Ravi) plays second fiddle to the chief minister — his name is Two!

Radha Ravi does the role with finesse. He plays a corrupt politician who allows his tongue to run ahead of him.

The surprise package is Varalakshmi. She spends her time in Canada in the film, but returns to India in the last 15 minutes when she realises that the film is dragging on too long, and someone has to end it!

She does such villainy in the last 15 minutes that she will put veterans like Shakal to shame! As she proudly declares, ‘I have been evil from the womb.’

I doubt even the director A R Murugadoss believes half the things that happen in the movie, so I am sure he doesn’t expect us to believe it too.

This year, a family of four burnt themselves to death at the Tirunelveli collectorate, Tamil Nadu, because of loan sharks. That scene is shown in Sarkar and the most telling dialogues come from a driver who is narrating the incident to the hero.

‘What did you do after that?’ asks the shocked hero.

‘Lots of people had shot videos and they sent it to me on WhatsApp. I forwarded it other people, and we keep forwarding till another topic catches our eye,’ the driver says.

Other events like the Jallikattu protests , the Sri Lankan navy firing on Tamil Nadu fishermen, the 13 deaths in the anti-Sterlite firing all make their way to the film’s dialogues.

It’s hard to believe that A R Rahman is the music director; all we hear is noise.

You come out of the theatre wondering why it is running houseful on the second day.

Then, the fans start yelling and you realise that it’s them filling up the theatres. 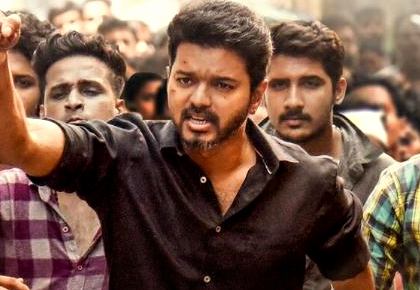