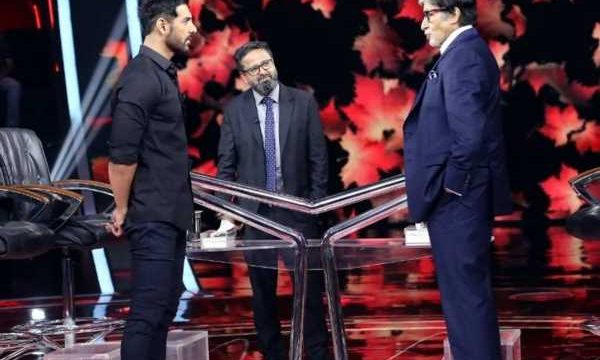 ‘This man changed the mindset of a generation.’

Then, he went on to work with his hero in Mohabbatein and Kabhi Khushi Kabhie Gham as associate director.

Speaking to Rediff.com Senior Contributor, Roshmila Bhattacharya, Nikkhil says, “Today, when I ask for a particular actor on the set and am told that he is still in his vanity van, I reel back to the time when I watched the Amitabh Bachchan sit on the set for two days without moving.”

I sat like a wide-eyed boy, just watching him

My first meeting with Amitabh Bachchan was at Adi’s (Producer-Director Aditya Chopra) house.

Yash Chopra and Adi had already discussed Mohabbatein with him and he knew what to expect from what would be his comeback film.

I was the associate director and excited that Amitji was coming to hear a narration.

It happened in the gadda room where Yashji would have his music sitting.

I sat like a wide-eyed boy, behind Amitji, Yashji, Shah Rukh (Khan), Adi and Anand Bakshi, just watching him.

He was like a newcomer himself, listening to Adi, the director of Dilwale Dulhania Le Jayenge, with such reverence.

The regard he showed the one-film-old director was exemplary, treating him the same way that he would a veteran like Ramesh Sippy, Manmohan Desai, Prakash Mehra or Yash Chopra himself.

It was the highest level of professionalism I have ever seen!

Even later, whenever we have met, he has never failed to impress, always enquiring after my wife Suparna and my daughter Keya whom he has met only occasionally.

On my birthday every year, at the stroke of midnight, there will be a message from him.

And whenever I have sent him a trailer or teaser of an upcoming project, something I rarely do as I feel it should be worthy of his attention, Amitji never fails to respond.

I invited him to one of the many previews of D Day, a film I’m very proud of.

He came, saw, told me it was fantastic, adding his usual, ‘Kabhi kabhi mere liye bhi film banaya karo (Sometime make a film for me too).’

One would imagine that he was being polite, but later, he actually sat with the writers, Ritesh Shah and Suresh Nair, and discussed the film, along with Javedsaab (script writer-lyricist Javed Akhtar), who was at the same screening.

Then, after returning home, he wrote a review of D-Day and posted it on his Facebook page.

I don’t think I have got a better review!

I told my wife, my heart full, ‘Today, I directed Amitabh Bachchan’ 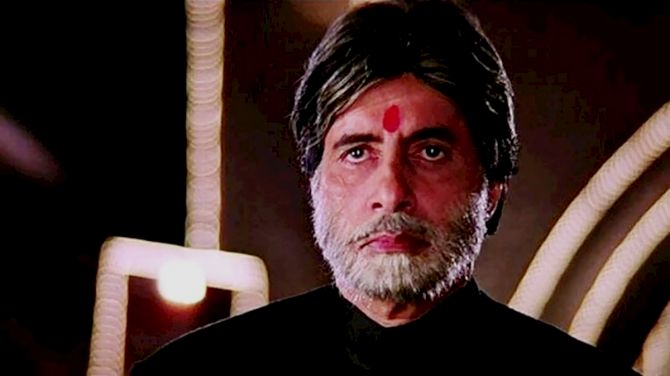 Getting back to Mohabbatein, on the first day of the shoot, I walked into Amitji‘s make-up room in RajKamal Studio (Parel, central Mumbai) and informed him that the shot was ready.

We walked together to the set and I distinctly remember that every single crew member stood up in silent reverence as he passed.

No one had told them to do so, they just felt the need to do it.

We reached the set of the assembly hall and Adi whispered his instructions, as is his habit.

Standing beside Manmohan Singh, the DOP (director of photography), I waited for Adi to finish, before walking up to Mr Bachchan and saying, ‘Sir, your look is left, off camera…’

He nodded and got ready for Adi to call ‘Action’.

I don’t think I said much more to him for the rest of the day, nothing of consequence.

We finished shooting the speech ‘Parampara, pratihista, anushasan‘ and wrapped up a super day at work.

I got home and told my wife, my heart full, ‘Today, I directed Amitabh Bachchan.’

If I had never directed after that, it would have been fine.

I had achieved what I had set out to do, work with Amitabh Bachchan!

This man changed the mindset of a generation

A whole generation of film-makers like Shaad Ali, Vijay Krishna Acharya, Sujoy Ghosh, Rohan Sippy, Anurag Kashyap and I owe our genesis and our journey in film-making to Amitabh Bachchan, his directors and his writers.

We grew up on his films, and knew all the dialogues by heart.

I still remember standing in a queue outside the Ganga Jamuna theatre (Tardeo, south Mumbai) for hours, then buying tickets in black to watch Satte Pe Satta or Don.

There’s no comparison, this man changed the mindset of a generation.

I can watch Trishul over and over again 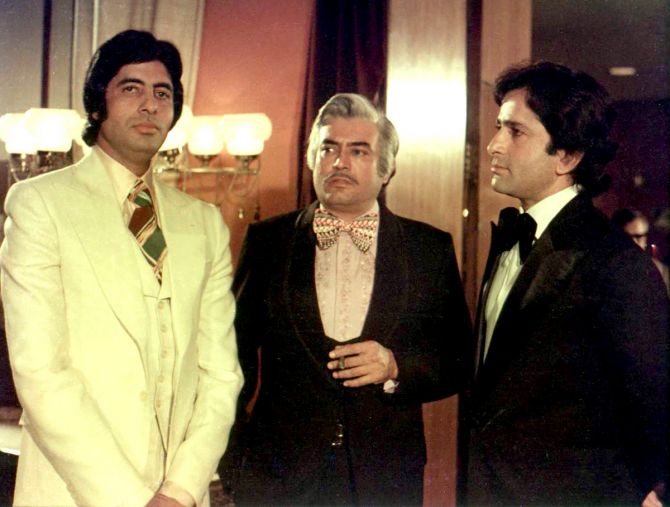 My favourite Amitabh Bachchan film, which I can watch over and over again, is Trishul.

It was a really difficult film because after his mother’s death, Vijay vows not to destroy his father, Raj Kumar Gupta, but take everything away from him, from his business to those who are dear to him.

Life comes full circle for Sanjeev Kumar’s character who suddenly finds himself all alone, the way his lover Waheeda Rehman had been after he had abandoned her and their son.

I also thought the first half of Agneepath was incredible.

As for the man himself, he has gone through some real highs… And many lows too.

But like a phoenix he has risen, after a life-threatening accident, a political setback, AB Corp’s demise…

He does not have Dharmendra’s conventional good looks. In Abhimaan and Mili, he looked like a lanky, awkward, boy from UP.

In fact, because of his height, gait and an injury to his left shoulder, Amitji has a distinctive way of standing which Allu Arjun has turned into a much-imitated craze after Pushpa.

What he has is the Bachchan baritone and a signature dance step that became a must in every baraat.

In fact, his comic timing is reminiscent of Peter Sellers’s Pink Panther.

A lot of credit for his on-screen persona goes to his directors, Ramesh Sipy, Manmohan Desai, Prakash Mehra and Yash Chpora.

And to his writers, Salim Khan and Javed Akhtar.

They found a muse in him and molded him beautifully.

Salim-Javed would rue to me that the problem with today’s heroes is that when you give them a gun, you immediately want to tell them to put it down in case it misfires.

But when you gave Amitabh Bachchan a gun, it seemed like an extension of his arm, he was so comfortable holding it.

And that’s what made him the evergreen ‘angry young man’.

‘But he has only one line to deliver!’ I exclaimed 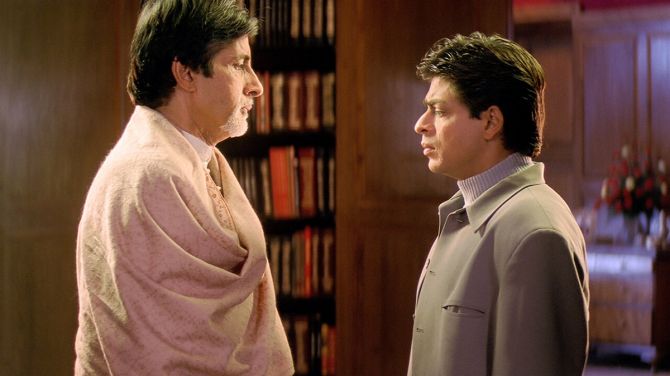 I worked with Amitji on Kabhi Khushi Kabhie Gham as well as associate director.

The billionaire business tycoon, Yashvardhan Raichand, is one of Amitji‘s favourite characters.

Everyone loved the scrip,t but I don’t think they had any idea of the scale to which Karan Johar (director) would take it, with helicopters, pyramids and the Waddesdon Manor in UK’s Buckinghamshire which was turned into the Raichand family estate in ‘Delhi’.

I remember the scene just before the interval where Raichand throws out his adopted son, Rahul, for marrying Anjali.

DoP Kiran Deohans was instructed to keep Amitji in the foreground, with Rahul and Anjali, played by Shah Rukh and Kajol, standing at the door, almost the length of a football field away.

As the camera focuses on him, he says everything he feels in just one line, ‘Aaj tumne sabit kar diya ki tum mere khoon nahin hi (Today you proved that you are not my blood).’

Then, as Rahul walks towards him and the music plays, as he speaks and walks away, leaving with Anjali, he just stands there, uttering not another word.

I made a scheduling gaffe, telling Amitji that we would be shooting the scene in two days when actually it was three.

Later, when I apologised, Jayaji, who is like a mother to all the ADs, reprimanded me, saying I had no idea what I had done!

‘Since the last two days, he has not been speaking to me or the kids, just moping around and being rude to everybody,’ she confided.

She explained that he had been getting into the ‘zone’.

‘But he has only one line to deliver!’ I exclaimed.

In those two days, he did not move 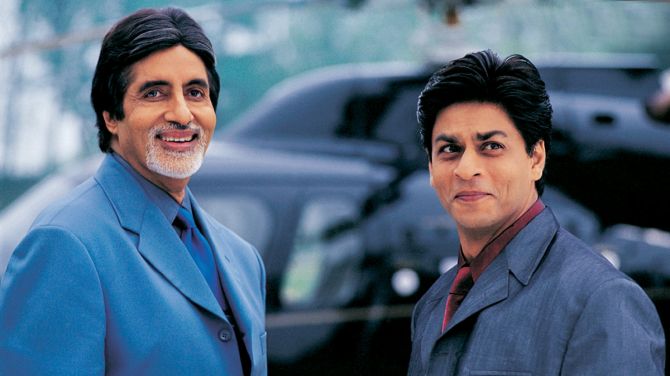 It was only later that Amitji explained that this was one of his most difficult scenes because the way Raichand behaved was not him.

He understood that it was wrong of his character to turn out his adopted son, telling him he was disappointed with him for marrying a halwai ki beti (daughter of a sweet seller).

But he had to be in character, and so the hours of prep.

We shot the scene over two days, and in those two days, he did not move from the spot where he was supposed to stand and speak that one line.

The three plastic chairs taped together on which he sits would be brought to the set every day.

And he would perch on them, standing or walking towards the camera only when the shot demanded it.

I watched as the lights were fixed, the crane or trolley set up, the camera tracking him…

He did not stir!

Even when the camera was on Shah Rukh and Kajol or zooming in on his back, he sat there, Zen-like.

Today, when I ask for a particular actor on the set and am told that he is still in his vanity van, I reel back to the time when I watched the Amitabh Bachchan sit on the set for two days without moving.

I tried so hard to get Mehrunnisa made, but the film fell through

I was to make Mehrunnisa with Amitabh Bachchan, Rishi Kapoor and Vidya Balan.

All three actors were super excited, and so was I.

Siddharth Roy Kapur and Disney were to produce the film with me and Sudhir Mishra was to direct it.

Vidya had clicked a picture with her two co-stars at the success party of The Dirty Picture and announced Mehrunnisa as their next film together.

I tried so hard to get Mehrunnisa made, but the film fell through.

There were several reasons, including an issue over the rights.

It’s my biggest disappointment as a producer.

I pray that Amitji continues to entertain us for years to come. 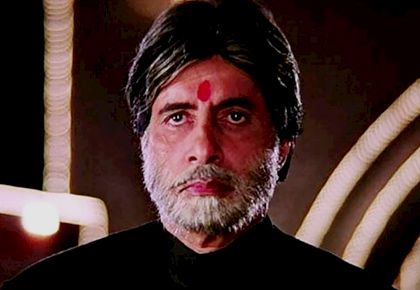