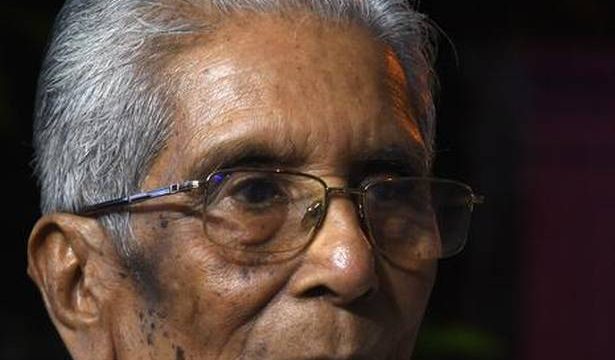 In a career spanning more than three decades, K.S. Sethumadhavan produced some of the most memorable cinema, both commercially successful and thematically challenging. He directed films in all the South Indian languages and in Hindi, and won numerous awards, including 10 National Film Awards, 9 Kerala State Film Awards and the J.C. Daniel Award of the Kerala government.

A pioneering filmmaker with a distinct narrative style and thematic preferences, Sethumadhavan produced several landmark films with brilliant performances that shaped Malayalam cinema’s style and idiom. With his passing last week, the industry has lost a great auteur and legendary storyteller.

Born in 1931 in Palakkad, Sethumadhavan’s film career began under T.R. Sundaram of Modern Studios, producer of the first Malayalam talkie, Balan. He made a Sinhalese film, Veeravijaya, before entering the Malayalam film scene with Jnanasundari in 1961, at a time when the industry was just beginning to find its footing. During the 1960s and 70s, when he was most prolific, he made a series of films adapting literary works of writers like Thakazhi, Uroob, Muttathu Varkey, Kesavadev, M.T. Vasudevan Nair, Malayattoor Ramakrishnan, K. Surendran, Pamman, K.T. Muhammed, P. Ayyaneth, Thoppil Bhasi and Parapurathu, most of whom also wrote his screenplays.

All his films dealt with individuals caught in the vortex of desire, revealing the flipside of Malayali family and society in the uncertain post-Independence decades. One abiding theme was love in all its forms. Though set in diverse socio-religious, economic and cultural milieus, at the centre of all his films — right from the 60s up to his last major film Marupakkam (1991/ Tamil) — were passions and conflicts triggered by sexual desire and filial love. It was he who first used psychoanalysis in his films. He also introduced several new themes and genres like psycho-drama (Yakshi/ 1968, Punarjanmam/ 1972) and political satire with a woman at the centre (Sthanarthi Saramma/ 1966).

He chronicled love in all its hues — tender, unconditional and undying, and also obsessive, unrequited, and murderous. For instance, in Yakshi, the protagonist, a professor and scientist, unable to come to terms with his own impotency, kills his love, while in Punarjanmam, a husband suffering from a mother fixation, is brought back to the carnal world by his object of desire.

Suspicion destroys the protagonist’s life in Vazhve Mayam (1970), and he spends the rest of his life pining for lost love. In Odayil Ninnu (1965), the unconditional but unrequited love that Pappu, a rickshaw puller, has for a young girl, finally consumes him. In Oppol (1981), a rustic ex-army man, transformed by love, forgives his young wife’s past. In Marupakkam, rejected love haunts the protagonist even on his death bed. Likewise, lies, repressed desires and betrayals define the families of Aranazhika Neram (1970), Chattakkari (1974), Kadalpalam (1969), Pani Theeratha Veedu (1973), and Thettu (1971).

Interestingly, while women abide by and mature with love, encountering and also suffering its vagaries, men either grab at it or obsess about it, often ending in violence or lifelong repentance. Many men in Sethumadhavan’s films are wounded and damaged by love. Unable to express freely and haunted by their own incapacity or obsessions, they turn against themselves. If at all they are brought back to life, it is not through self-will but by women.

In Sethumadhavan’s narrative world, love is not ethereal or lyrical, but very much psychological, social and emotional, and this intense drama of desire is played out within the family and neighbourhood. Love blooms and withers, rages and revels, and it is through love that lives are revived and reborn, revenged and reviled.

In Oru Penninte Katha (1971), a rape survivor returns after decades to settle scores with her abuser. In Ormakal Marikkumo (1977), a betrayed woman is reincarnated and returns to haunt her lover. Sometimes, the object of unconditional love turns out to be unworthy, as in Jeevikkan Marannu Poya Stree (1974), where the woman realises that the man in whose memory she has lived her whole life was unfaithful.

Unconditional love also heals the man who then empathises with the woman (Oppol), and it leads to reconciliation and overcoming of religious differences (Achanum Bappayum/ 1972) as well. Even in his last films (Sunil Vayassu 20/ 1986 and Venal Kinavukal/ 1991), he dealt with the unpredictable and violent adolescent awakening of sex. Unlike his peers, Sethumadhavan never resorted to sloganeering or comforting closures.

Sethumadhavan worked with a favourite stable of actors, which included Sathyan, Sarada, Sheela, Prem Nazir, Adoor Bhasi, KPAC Lalitha, Bahadur and Sankarady, producing some of their career-best performances. These stars were never typecast, and they essayed complex roles portraying deep moral turpitude and internal struggle. Comedians like Bhasi and Bahadur played some of their most serious roles in Sethumadhavan’s films.

Storytelling was his forte, and he effortlessly blended elements of cinematography, editing, sound, music, and, most importantly, acting to create intense narrative synergy. Exploring the world, and life, in all its complexity and contradictions — personal, psychological and political — he revealed the dark side of Malayali modernity.

For instance, one can see the hollowness of secular verbiage when it comes to living with and respecting the faith of the other (Achanum Bappayum), or the moral turbulences within the communist movement, or how personal discontent veers towards extremism (Anubhavangal Palichakal/ 1971). His pungent portrayals of the unresolved conflicts in Malayali masculinity and its penchant for violence directed inwards and outwards laid bare the fault lines in the male psyche and family structure, that made love perverse, difficult or impossible.

The psychological, social and political dilemmas and the internal agonies and struggles of his characters were profound and deep-rooted. His films mapped the subterranean realms of our life-world and the roots of what’s now termed ‘toxic masculinity’ can be found in them. Upon closer analysis, his films offer many a startling insight into the tremors and turpitudes of the present.

The Kerala-based writer is an award-winning critic, curator, director and translator.