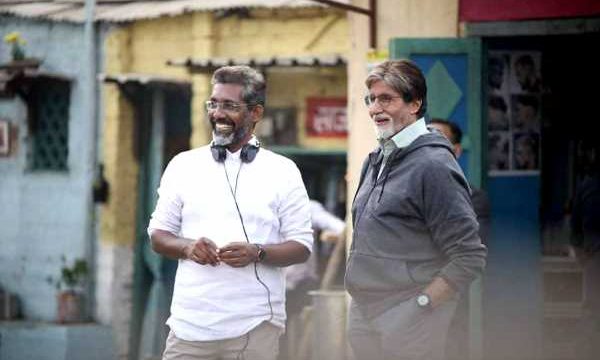 ‘The stories I want to tell are very important.’

One of the most touching scenes in Nagraj Popatrao Manjule‘s film Jhund has a character say, it’s the circumstances that make living tough.

It’s a sentiment that the director understands well, and is perhaps inspired from his own life. “Nobody knows what career they want to pursue in life, so I tried a lot of things. I got the job of a policeman; then I wanted to be a professor…” he says, conducting the interview entirely in Hindi.

Manjule says his parents were mostly “unpad; mazdoori karte the (illiterate, they used to be labourers).”

Perhaps that spurred him on to take a master’s degree in Marathi literature.

“Then, my friends suggested that I do a degree in mass communication, so I did that. One of the things I had to do in that curriculum was make a short film, and so I did. Pistulya got a National Award. That was a big deal for me. My confidence grew, and that’s how I started,” he says.

His first feature film Fandry (2013), made in Marathi, told a hard-hitting story of a Dalit teenager named Jabya and his family. It won him two National Awards.

“So I kept going ahead in life,” he says. It was his next film which caught India’s attention.

Sairat (2016) was a modern day Romeo and Juliet story based on caste. It was such a critical and commercial hit that it became a part of everyday conversations. It made Karan Johar buy the rights for a Hindi remake.

Surprisingly, it took Manjule six years to release his next work: An episode in the mini series Unpaused: Naya Safar called Vaikunth as well as the Amitabh Bachchan starrer Jhund.

“Jhund got delayed. It was supposed to release in 2018. But the process got delayed, and then COVID happened. Vaikunth released meanwhile,” he explains. What caused the delay? Was it the pressure of living up to Sairat?

“I don’t take any pressure. I’m not among those who feels pressure,” he answers. “Just because I did something, it doesn’t mean it must always happen just like that. Every film has its destiny. They (Bollywood) wanted to work with me, and I did too. But it had to work out. I spent some of that time writing stories too.”

Jhund was released in theatres before it arrived on ZEE5 on May 6.

It tells the real life story of football coach Vijay Barse who tries to add value to the lives of a group of slum youth by encouraging them to play the game.

“The story came to me, and Mr Bachchan was already a part of the project,” Manjule says. “This story was inspired by Vijay Barse‘s life. I liked the story. I felt I should make this film because it went with the kind of films I make. Plus, I wanted to make a film with Mr Bachchan.” “Everyone is a fan of Bachchan sir. I have been watching his films since childhood. I never thought I would direct him some day,” says Manjule. “But it happened and I’m very happy that it did. I’m very happy that I got to make a film the way I wanted, and with such a big star.

“He is a director’s actor. Once he likes a story, he puts his whole mind to it.”

“Initially, I was a bit confused about how I should work with him, what would happen. But when we started working, he worked with a lot of love and simplicity. I had heard that he is very passionate about his work, and I got to experience that,” Manjule recalls.

“Bachchan sir is very focused towards his work. He throws no tantrums. He’s such a big star and yet, he becomes like one of us at work. I learnt a lot from him. He’s the acting ka badshah and yet so down to earth,” the director adds.

“I’m not nervous where my work is concerned. But yes, right in the beginning, when I had to meet him for meetings, I was very nervous. But he helped remove that darr (fear). He made me comfortable.”

How different is making a Bollywood film from a Marathi one?

“Only the scale is different, nothing else,” he says. “If someone like Mr Bachchan is on your set, your responsibility will obviously increase. Hindi or Marathi, the story is what matters.” Manjule adds that his signature flavour runs through all his films. Each deals with India’s unyielding caste system.

“If a woman is making a film, she will want to tell her story. I’m trying to tell mine,” Manjule says. “The stories I want to tell are very important. Usually, such stories are not seen in films. But I want these stories to be told.”

Even as the message runs clear in the films, one wonders if Manjule is toning down the harshness over the years. Unlike his earlier films, Jhund and Vaikunth end on a promise of hope.

But Manjule feels: “Every film has its story, and a graph. It’s not necessary that every film should make you sad. Every story has a life of its own. Just because one story is negative doesn’t mean that the next will be positive.” The film-maker, who was born in a village in Solapur, has not shifted to Mumbai despite his increasing Bollywood presence.

“I live in Pune and come to Mumbai only on work,” he says. “My brother lives in Mumbai — he is in the police — so I had stayed with him for a few months (before I became a director). Otherwise, I have never lived in Mumbai.”

While he is open to making more Hindi films, the director is currently concentrating on his next Marathi production, Ghar Banduk Biryani in which he also acts along with Sayaji Shinde and Akash Thosar.

Manjule likes to act in his films, and one can’t help but wonder: What does he like better: Acting or directing?

“I like direction more. I don’t know how good an actor I am,” he says. “I feel pressure as an actor, but not as a director.” 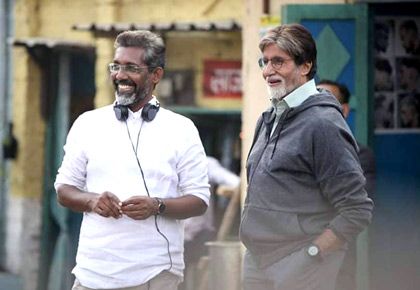