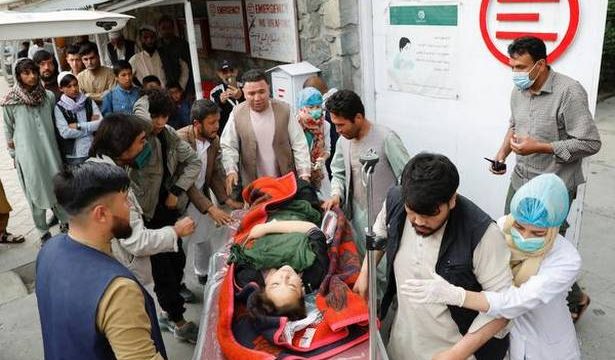 Students among the 52 injured who have been shifted to hospital: official

A blast outside a girls’ school in an area of the Afghan capital populated largely by the Shia Hazara community killed at least 30 people and wounded scores, including students, on Saturday, officials said.

Interior Ministry spokesman Tareq Arian told reporters that at least “30 people were killed and 52 wounded” in the blast. “People have been evacuated to hospitals from the site,” he added.

Mr. Arian’s deputy Hamid Roshan told AFP that an investigation had begun into the explosion, adding that casualties included students.

The blast occurred in the west Kabul district of Dasht-e-Barchi as residents were out for shopping ahead of Eid-ul-Fitr next week that marks the end of Ramzan, the Muslim holy month of fasting.

The neighbourhood is populated largely by the Shia Hazaras and is often a target for Sunni Islamist militants.

Mr. Roshan said that an investigation had begun into what he said was a “terrorist attack”, adding that casualties included students.

Health ministry spokesman Dastagir Nazari said several ambulances had been rushed to the site and were evacuating the wounded.

“People in the area are angry and have beaten a number of ambulance workers,” he told reporters.

The blast comes as the U.S. military continues to pull out its last remaining 2,500 troops from the country, despite faltering peace efforts between the Taliban and Afghan government to end a decades-long war in Afghanistan.

Officials have regularly blamed the Taliban for attacks in Kabul, which the insurgents have steadfastly denied.

The Taliban have largely refrained from launching major attacks in Kabul since February last year, when they signed a deal with the United States that paved the way for peace talks and withdrawal of the remaining U.S. troops.

But the group has clashed in near daily battles in the rugged countryside with Afghan forces even as the U.S. military continues its withdrawal.

The Dasht-e-Barchi neighbourhood has been a regular target of attacks from Sunni Islamist militants.

In May last year a group of gunmen attacked a hospital in the area in a brazen daylight raid that left 25 people killed, including 16 mothers of new-born babies.

The hospital was supported by Doctors Without Borders, the international medical charity, which later pulled out of the project.

No group claimed that attack, but President Ashraf Ghani blamed the Taliban and the Islamic State group.