Trump is said to have urged the Ukranian president on a July 25 phone call to investigate Biden’s son, Hunter Biden, who did business in Ukraine while his father was vice president. 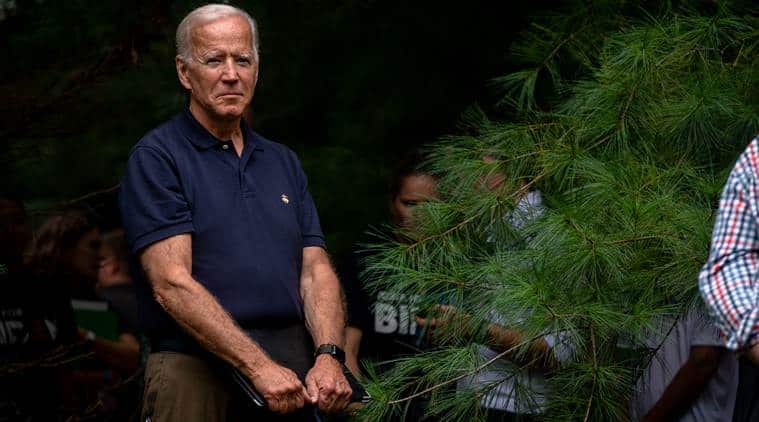 Allegations that President Donald Trump courted foreign interference from Ukraine to hurt his leading Democratic rival, Joe Biden, dominated presidential politics on Saturday, as Biden demanded a House investigation of Trump’s phone call in July with Ukraine’s leader and as Trump lashed out, denying wrongdoing without releasing a transcript of the call.

With Trump seizing on a familiar defense, saying Democrats were undertaking a “witch hunt” against him on Ukraine, Biden called on the House of Representatives to begin a new investigation of whether the president sought the interference of a foreign government to bolster his reelection campaign.

“This appears to be an overwhelming abuse of power,” Biden said during a campaign swing in Iowa. “We have never seen anything like this from any president.”

Trump is said to have urged the Ukranian president on a July 25 phone call to investigate Biden’s son, Hunter Biden, who did business in Ukraine while his father was vice president. Trump’s request is part of a secret whistleblower complaint in the intelligence community that is said to involve Trump making an unspecified commitment to a foreign leader, according to two people familiar with the complaint.

The sharp accusations between Trump and Biden elevated the president’s dealings with Ukraine as a potentially significant new issue in the presidential race, and offered voters a preview of what is likely to be an extraordinary general election contest if Biden were to win the nomination.

The controversy has focused on whether Trump manipulated foreign policy — a military aid package to Ukraine had been delayed at the time of the phone call — to pressure the country’s newly elected president, Volodymyr Zelenskiy, to take action to damage Biden’s election bid.

On Saturday, Trump sought to deflect attention from that question by accusing Biden of acting improperly as vice president in calling for the ouster of a Ukranian prosecutor who had overseen an inquiry into corruption related to the oligarch whose company employed Hunter Biden.

Trump defended his own conduct as “perfectly fine” and routine.

“Now that the Democrats and the Fake News Media have gone ‘bust’ on every other of their Witch Hunt schemes, they are trying to start one just as ridiculous as the others, call it the Ukraine Witch Hunt,” Trump wrote on Twitter. He said that any effort to investigate him would fail, comparing it to the investigation by Robert Mueller, the special counsel, into his ties to Russia during the 2016 campaign.

Intensifying a line of attack he and his allies have stoked for months, Trump said the real problem was Biden and questions about what the president described as “the Joe Biden demand that the Ukrainian Government fire a prosecutor who was investigating his son.”

Referring to his conversation with Zelenskiy, Trump said: “Nothing was said that was in any way wrong, but Biden’s demand, on the other hand, was a complete and total disaster.

No evidence has surfaced to support Trump’s claim that the former vice president intentionally tried to help his son by pressing for the prosecutor general’s dismissal. But some State Department officials had expressed concern that Hunter Biden’s work in Ukraine could complicate his father’s diplomacy there.

The issue strikes a particular nerve for Biden, who has long feared putting his family under the harsh spotlight of a presidential campaign. During a two-minute encounter with reporters on Saturday morning, he grew irate, angrily insisting that he had never spoken with his son about any overseas work.

“You should be looking at Trump,” Biden said. “Trump is doing this because he knows I’ll beat him like a drum.”

Even as they avoided mentioning Biden, other Democratic presidential candidates moved quickly to capitalize on the new dynamic in the race. Sen. Elizabeth Warren, who rarely mentions Trump in her stump speech, opened her remarks at a cattle call on Saturday afternoon by excoriating both the president and congressional Democrats.

“He has solicited another foreign government to attack our election system,” she told a crowd of 1,200 cheering Democratic voters gathered in Des Moines for an afternoon of primary speeches. “It is time to call out this illegal behavior and start impeachment proceedings right now.”

Warren, who first called for Trump to be impeached in April after the release of Mueller’s report, went further on Saturday, arguing on Twitter that by failing to act on impeachment, Congress had become “complicit in Mr. Trump’s latest attempt to solicit foreign interference to aid him in U.S. elections.”

Though he has yet to call for impeachment proceedings against Trump — as have several of his rivals for the 2020 Democratic nomination — Biden on Saturday tiptoed closer to embracing the idea that has been gaining support on Capitol Hill despite opposition from House Speaker Nancy Pelosi.

Biden, whose appearances on the campaign trail can be halting and sprinkled with misstatements, has generally delivered his strongest performances when focused on Trump. Speaking about the president allows Biden to discuss foreign policy and national security, issues that his campaign has said differentiate Biden, a former Senate Foreign Relations Committee chairman, from the rest of the 2020 Democratic field.

While Trump’s attacks give Biden the one-on-one showdown with the president that his campaign has spent months trying to create, it also exposes him and his son to another round of probing questions about Hunter Biden’s lobbying business in Ukraine.

The Biden campaign moved quickly to warn the news media over the story, underscoring a deep concern about how allegations about the younger Biden’s work will be received by voters. “Any article, segment analysis and commentary that does not demonstrably state at the outset that there is no factual basis for Trump’s claim, and in fact that they are wholly discredited, is misleading readers and viewers,” said the deputy campaign manager, Kate Bedingfield, in an email to reporters.

But Biden advisers also seized on the furor to portray Trump as fixated on, and worried about, a potential general election race against Biden.

“There is only one candidate the president is trying to get foreign governments to dig up bogus dirt on,” Anita Dunn, a senior adviser to Biden, said.