Cuomo said in a statement to the Times on Saturday that he believed he had been acting as a mentor and had “never made advances toward Ms. Bennett, nor did I ever intend to act in any way that was inappropriate.” 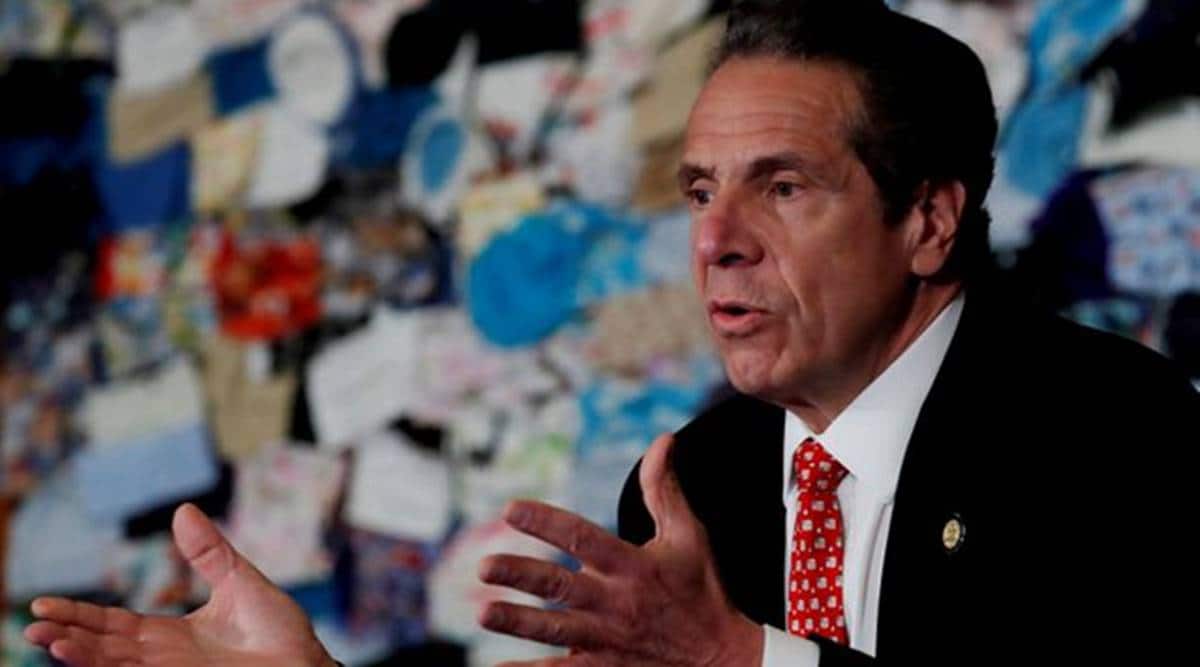 A second former aide to Gov. Andrew Cuomo is accusing him of sexual harassment, saying that he asked her questions about her sex life, whether she was monogamous in her relationships and if she had ever had sex with older men.

The aide, Charlotte Bennett, who was an executive assistant and health policy adviser in the Cuomo administration until she left in November, told The New York Times that the governor had harassed her late last spring, during the height of the state’s fight against the coronavirus.

Bennett, 25, said the most unsettling episode occurred June 5, when she was alone with Cuomo in his state Capitol office. In a series of interviews this past week, she said the governor had asked her numerous questions about her personal life, including whether she thought age made a difference in romantic relationships, and had said that he was open to relationships with women in their 20s — comments she interpreted as clear overtures to a sexual relationship.

Cuomo said in a statement to the Times on Saturday that he believed he had been acting as a mentor and had “never made advances toward Ms. Bennett, nor did I ever intend to act in any way that was inappropriate.” He said he had requested an independent review of the matter and asked that New Yorkers await the findings “before making any judgments.”

Bennett said that during the June encounter, the governor, 63, also complained to her about being lonely during the pandemic, mentioning that he “can’t even hug anyone” before turning the focus to Bennett. She said that Cuomo asked her, “Who did I last hug?”

Bennett said she had tried to dodge the question by responding that she missed hugging her parents. “And he was, like, ‘No, I mean like really hugged somebody?’” she said.

Cuomo never tried to touch her, Bennett said, but the message of the entire episode was unmistakable to her.

“I understood that the governor wanted to sleep with me, and felt horribly uncomfortable and scared,” Bennett said. “And was wondering how I was going to get out of it and assumed it was the end of my job.”

Bennett said she had disclosed the interaction with Cuomo to his chief of staff, Jill DesRosiers, less than a week later and was transferred to another job, as a health policy adviser, with an office on the opposite side of the Capitol, soon after that. Bennett said she had also given a lengthy statement to a special counsel to the governor, Judith Mogul, toward the end of June.

Bennett said she ultimately decided not to insist on an investigation because she was happy in her new job and “wanted to move on.” No action was taken against the governor.

In his statement, Cuomo called Bennett a “hardworking and valued member” of his staff with “every right to speak out.” He said that Bennett had spoken to him about being a sexual assault survivor — an experience about which she had been open in the past — and that he had tried to be supportive and helpful. “The last thing I would ever have wanted was to make her feel any of the things that are being reported,” the governor said.

The governor did not deny that he asked Bennett personal questions; he said in the statement that he would have no further comment until the review concluded.

Bennett’s account follows another detailed accusation, published Wednesday, by Lindsey Boylan, a former state economic development official who said that Cuomo had harassed her on several occasions from 2016 to 2018, at one point giving her an unsolicited kiss on the lips at his Manhattan office.

Cuomo’s office has called Boylan’s accusations untrue, but they have nonetheless prompted calls for investigations into her claims. In addition to the two women’s harassment allegations, the governor, a third-term Democrat, is confronting significant political fallout over his handling of the state’s nursing homes during the pandemic.

After seeing Boylan detail her accusations against Cuomo, Bennett shared Boylan’s account on Twitter, suggesting that people read it if they wanted a true picture of “what it’s like to work for the Cuomo” administration.

The Times contacted Bennett, and she agreed to relate her own account of harassment. She said she felt an obligation to other victims of sexual harassment and wanted to counter the way Cuomo “wields his power.”

Bennett said she had told her parents and friends about the exchange with the governor around the time that it happened, as well as about her growing discomfort with having to work closely with him, and had kept text messages from that period.

The Times reviewed the messages and confirmed their contents with those who received them. Bennett also retained text messages from DesRosiers and Mogul that alluded to their meetings in June but did not mention the subject matter.

Bennett was hired by the administration in early 2019, working out of the governor’s Manhattan office as a briefer, an entry-level position. She had graduated from Hamilton College in 2017, where she was active in women’s issues and founded a sexual misconduct task force. She said her own experience in surviving a sexual attack had prompted her to “help sexual assault survivors be heard and enforce victims’ rights,” according to a bulletin on the college’s website.

By mid-2019, Bennett had been promoted to senior briefer and executive assistant after an interview with Cuomo. The two became friendly, she said, and they bonded over shared connections with Westchester County: At the time, he was living with Sandra Lee, a celebrity chef, in Mount Kisco; Bennett was living with her parents in a neighboring hamlet. She mentioned to Cuomo that she had played middle-school soccer against one of his daughters, who are also in their mid-20s.

“We got along really well,” she said of the governor. Cuomo, she said, would sometimes ask questions about her dating life that she said seemed inappropriate but not necessarily unmanageable.

“I saw him more as a father figure,” she said. “I wasn’t thinking about it as anything sexual.”

In January 2020, Bennett sent her mother a text. “Had a really long convo with Gov today,” she wrote, outlining a two-hour conversation about numerous topics, including her career goals.

“He had a lot to say and was very emotional and serious but also asked a lot of questions,” she wrote, adding, “He got emotional. Not me.”

Bennett’s mother, Jessica, confirmed the text, and her feeling, at the time, that it was reassuring that the governor seemed to be taking on the role of a mentor.

Charlotte Bennett said she was asked in late March to begin working in Albany as part of the state’s COVID-19 response effort. Two months later, in mid-May, the governor’s perception of their relationship seemingly began to change, she said.

On May 15, she said she arrived at the Capitol around 7 a.m. to find Cuomo already at work. Bennett was there to drop off some briefing papers, but Cuomo was chatty, asking about her love life and, in a gossipy way, whether she was involved with other members of the governor’s staff. She memorialized the exchange in several texts to another Cuomo staff member that the Times reviewed.

Bennett said she had mentioned a speech she was scheduled to give to Hamilton students about her experience as a survivor of sexual assault. She said she had been taken aback by Cuomo’s seeming fixation on that element of her life experience.

“The way he was repeating, ‘You were raped and abused and attacked and assaulted and betrayed,’ over and over again while looking me directly in the eyes was something out of a horror movie,” she wrote in a second text to her friend. “It was like he was testing me.”

In retrospect, Bennett said, she viewed the May 15 meeting “as the turning point in our relationship.”

“Anything before it I now see differently,” she said. “I now understand that as grooming.”

Three weeks later, Bennett said, she was summoned to Cuomo’s second-floor office and was asked to take dictation with another aide.

After the second aide left, Cuomo and Bennett continued their work. When they finished, she said, he asked her to turn off her recorder, and he began a winding conversation that touched on the Black Lives Matter protests and his daily news conferences.

But, Bennett said, the governor also started to ask questions about her personal life, including whether she was romantically involved, whether she was monogamous in her relationships and whether she had ever had sex with older men.

A series of text exchanges with a female friend from that afternoon, June 5, comported with Bennett’s recounting of the story this week. In the texts, she told her friend that she was shaken and upset by the episode and worried about even writing it down.

Bennett said she spoke to Cuomo’s chief of staff, DesRosiers, on June 10, five days after the episode.

She said the meeting, in DesRosiers’ office, had lasted about 10 minutes. Bennett said she had recounted her interaction with Cuomo, and she recalled that DesRosiers had asked a few questions, been apologetic and asked to speak to her again in two days.

In a text message sent to a friend after the meeting, Bennett said DesRosiers had said, “How can we do this?” asking whether she wanted to stay in the executive branch or move to another part of the state government.

When Bennett’s friend asked what that meant, Bennett explained that an outside job would still be with the administration, but “just not interacting with him.”

She also told her friend, in the same series of texts, that she trusted DesRosiers but was worried about Cuomo’s reaction: “I just said I didn’t want him to find out and get mad.”

Two days later, on June 12, DesRosiers told Bennett she would be transferred to a new position as a health policy adviser, still working in the executive branch, but in a different part of the Capitol. Her new job was announced in a June 17 email to Department of Health officials. “Welcome Charlotte!” it concluded.

Later that month, Bennett met with Mogul, a special counsel to the governor, and repeated her claims. She said, however, that she soon decided to “let this go and move on.”

In a statement Saturday, Beth Garvey, another special counsel to the governor, said that “Ms. Bennett’s concerns were treated with sensitivity and respect and in accordance with applicable law and policy.” She characterized the transfer to a health policy position as fulfilling “a long-standing interest” of Bennett’s.

Of Bennett, Garvey said, “she was consulted regarding the resolution and expressed satisfaction and appreciation for the way in which it was handled.” Barbara Jones, a former federal judge in Manhattan, will lead the outside review into the matter, Garvey said.

Bennett left state government last fall, and she now lives and works in a neighboring state. She said that her anger about what had happened had continued to percolate and had led to her departure.

“His presence was suffocating,” she said. “I was thinking that I could recover and have distance, but that is so naive.”