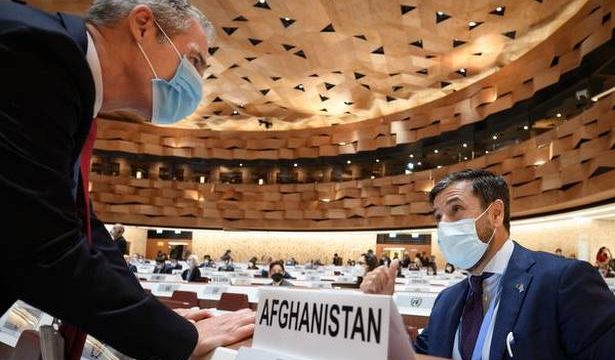 The world should not be silent as millions fear for their life and human rights: Ambassador Andisha

An Afghan Ambassador appointed by the Kabul government that collapsed last month called on Tuesday for the UN to immediately launch an investigation into alleged abuses by the new Taliban authorities.

Speaking before the UN Human Rights Council in Geneva, Nasir Ahmad Andisha stressed the need for international scrutiny of alleged violations since the Taliban takeover on August 15, particularly those concerning the rights of women and girls. “Today, the world cannot and should not be silent as millions fear for their life and human rights, and humanitarian crises are unfolding in the country,” Mr. Andisha said. He urged the UN’s top rights body to “immediately dispatch a fact-finding mission to investigate and document abuse of human rights,” including in Panjshir Valley, the last pocket of resistance to the Taliban’s rapid takeover as U.S. troops withdrew.

Mr. Andisha, who was appointed by former President Ashraf Ghani’s administration, remains the country’s representative to the UN in Geneva since the new authorities have not yet requested a change. He had appealed during a special council session on Afghanistan on August 24 for the UN’s top rights body to establish an international fact-finding mission to investigate alleged violations, and voiced disappointment when it failed to do so.

UN rights chief Michelle Bachelet and the EU have also urged the council to establish a mechanism for monitoring and documenting rights abuses in the country.