Prime Minister Benjamin Netanyahu of Israel displayed satellite photographs that he said showed the site, and he called upon other countries to join the United States in maintaining pressure on Tehran. 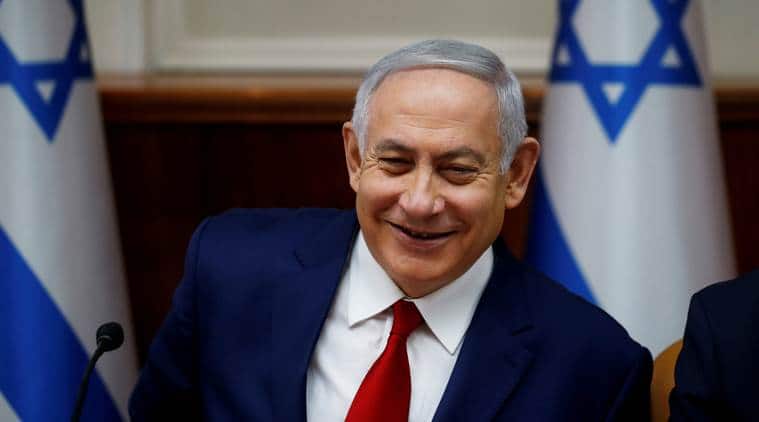 Israel accused Iran on Monday of having harbored an undisclosed nuclear-weapons site that the Iranians destroyed a few months ago for fear of exposure. Iran ridiculed the accusation.

Prime Minister Benjamin Netanyahu of Israel displayed satellite photographs that he said showed the site, and he called upon other countries to join the United States in maintaining pressure on Tehran.

Netanyahu told reporters in Jerusalem that Israel had first learned of the site, in the central Iranian city of Abadeh, in early 2018 when Israeli spies stole what he has previously described as a huge trove of the archives of Iran’s nuclear program.

When the Iranians learned that Israel was aware of the site, he said, “they simply destroyed it, just eliminated everything.”

Netanyahu showed the photographs a week before an election in which he is battling for political survival. His move also came after President Donald Trump suggested he might meet with President Hassan Rouhani of Iran, possibly during the United Nations General Assembly next month.

The Israeli prime minister described the satellite photos as having been taken in late June, and then about a month later, which appeared to show damage to buildings in a complex along a mountain ridge.

“Every time they hide, we reveal, and then they try to cover their tracks,” Netanyahu said.

He took no questions during the presentation. But his assertions left many questions unanswered, chief among them why Israel waited until now to reveal information from a trove of material seized at a warehouse in Tehran, in an espionage operation, 21 months ago.

Netanyahu first revealed some material from the trove last year. In the summer of 2018, he invited reporters from The New York Times, The Wall Street Journal and The Washington Post to review some of the material under the watchful eye of Israeli intelligence officers.

During those briefings, the officers were explicitly asked whether the documents pointed to additional undeclared nuclear facilities in Iran, but there was no mention of Abadeh.

So it is unclear when Israel concluded that the facility was linked to the nuclear program or why it did not raise the public alarm earlier, before it was dismantled.

While some information was given by Israel to inspectors at the International Atomic Energy Agency, it is not clear that Abadeh was included. Nor is it clear why Netanyahu did not reveal the facility’s existence as soon as the satellite imagery he cited had detected the Iranians dismantling it earlier this summer.

There was no immediate comment from the energy agency, the Vienna-based nuclear monitor of the United Nations, which polices Iran’s compliance with the Nonproliferation Treaty and the 2015 nuclear agreement that Trump has abandoned.

But hours before Netanyahu spoke, the agency’s acting director general, Cornel Feruta, said that in a just-completed visit to Iran, he had “stressed the need for Iran to respond promptly to agency questions related to the completeness of Iran’s safeguards declarations.”

Feruta declined to specify what the agency’s inspectors wanted to know from the Iranians.

The agency has said for years that Iran halted organized efforts at exploring possible nuclear weapons in 2003. American intelligence officials have made the same conclusion.

The Israelis have accused the agency inspectors of inadequate supervision of Iran. According to Yossi Cohen, chief of the Mossad, Israel’s spy agency, a major purpose of stealing the nuclear archive was to give the agency information on where to look in Iran.

“Make no mistakes: The target of the operation in Tehran was not only to obtain intelligence or to make an impression on the world’s consciousness,” he said in speech last June.

The timing of Netanyahu’s news conference, with no opportunity for reporters to ask questions, led his political opponents to charge that he was exploiting national intelligence information for personal advantage.

“Netanyahu’s use of sensitive security-related intelligence for the purposes of his propaganda speaks volumes of his impaired judgment,” Benny Gantz, the former Israeli army chief of staff who leads the Blue and White Party and is tied with Netanyahu in the polls, told Israeli public radio.

Gantz and other Netanyahu critics, including former Prime Minister Ehud Barak, have repeatedly accused Netanyahu in recent weeks of improperly releasing secret information, often by disregarding Israel’s long-standing policy of ambiguity to claim credit for airstrikes on Iranian forces and their allies in Syria and Iraq.

Netanyahu has staked his career on his crusade against Iran and what he has described as its malevolent nuclear ambitions.

His success in helping to persuade Trump to abandon the Obama administration’s nuclear deal with Iran, which eased sanctions in return for Iran’s verifiable promises of peaceful nuclear work, was one of Netanyahu’s crowning foreign-policy achievements.

But the Trump administration’s current overture to Rouhani, and an offer to Iran by President Emmanuel Macron of France of $15 billion in aid, have undercut Netanyahu’s unremitting posture toward Tehran.

At his news conference Monday, Netanyahu warned that Iran was “systematically lying” and urged other countries to embrace Trump’s policy of stiff sanctions.

His message could have been aimed as much at Washington or Paris as at any other world capital: “The only way to stop Iran’s march to the bomb, and its aggression in the region, is pressure, pressure and more pressure,” he said.

One Israeli analyst who closely tracks the country’s stance toward Iran said Netanyahu was unlikely to change any minds with Monday’s announcement.

“President Trump already believes Iran hid certain activities and nevertheless seems to lean towards engaging with President Rouhani,” he said. “Proof of another activity which Iran supposedly hid won’t make much of a difference for him.”

Israeli public radio quoted an unidentified aide to Netanyahu as having insisted that national-security “professionals,” not political appointees, had advised the prime minister to unveil the Abadeh site Monday, following Feruta’s statement in Vienna.

Netanyahu also asserted Monday that the nuclear agency had found traces of uranium at a site Israel had uncovered in Turquzabad, where he said Iran had stored material and equipment for its nuclear program.

The Abadeh complex is clearly visible on Google Earth. The most recent Google Earth image was taken in January, months before the destruction asserted by Netanyahu, and shows a dozen or so buildings that appear to have been little used, with no obvious checkpoints or fences typically associated with Iran’s military sites and large nuclear facilities.

Coronavirus fallout: Luxury cruise with more than 5000 onboard quarantined in Shenzhen
India News