At least two of the injured were airlifted from the scene by medical helicopters. It wasn't immediately known whether the other two persons who died were bus passengers or were in one of the other vehicles involved.

A crash involving a commercial passenger bus and three other vehicles on a New Mexico highway early Sunday killed three people and injured 24 others, some critically, authorities said.

One of the people killed was in a car that struck a pickup truck from behind around 2 a.m. Sunday on Interstate 25 just north of Bernalillo, about 18 miles (29 kilometers) north of Albuquerque, Sandoval County Sheriff’s Office spokesman Lt. Keith Elder said.

The bus driver took evasive action to avoid hitting the disabled car and its driver, who was ejected. But the bus driver lost control and the bus rolled onto its right side. It was then sideswiped by a semitruck, according to Elder.

Rio Rancho Fire Rescue said emergency crews had to extricate several people who were trapped in the bus using a tool that pries open parts of a vehicle.

Photos show a mangled car that’s almost entirely flattened and the bus on its side. At least two of the injured were airlifted from the scene by medical helicopters. It wasn’t immediately known whether the other two persons who died were bus passengers or were in one of the other vehicles involved. 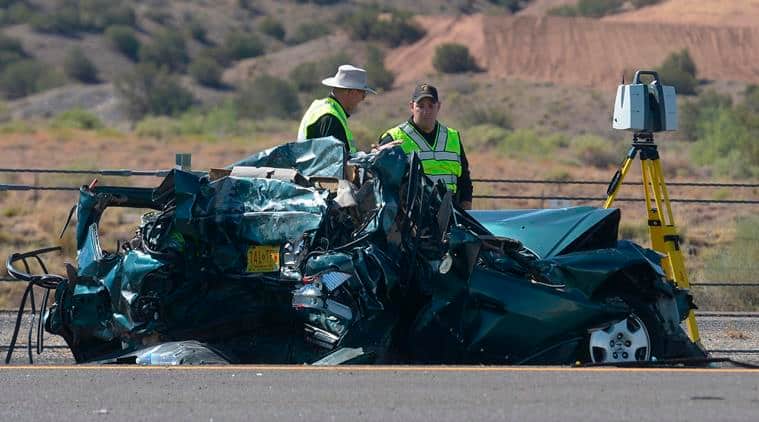 Elder said the names of the three dead were being withheld until relatives could be notified. Sheriff’s officials said 35 people were on the bus operated by El Paso-Los Angeles Limousine Express. Its vehicles service cities in the Southwest and Mexico.

Bus company president Jerry Rosenbaum said the bus had started from Denver and was en route to El Paso, Texas. According to Rosenbaum, two drivers were on the bus and they were among those hospitalized. Travelers who didn’t require hospital treatment were placed on another bus.

Rosenbaum said the company has cooperated with authorities and will help provide transportation for any passengers upon their release from the hospital. “As difficult as it’s been for me, I keep in mind that what the passengers and their families have to go through is much worse,” Rosenbaum said.

Twelve of the injured were taken to University of New Mexico Hospital, where three were in critical condition, officials said. Eight patients were taken to another hospital, and authorities said six were treated and released. The accident closed Interstate 25 in both directions for more than 11 hours.