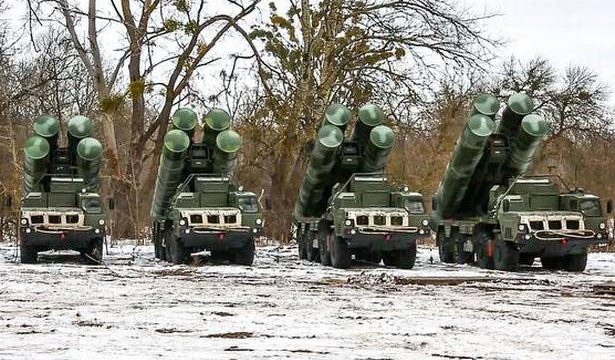 The United States has said Russia is also dispatching some 30,000 troops to Ukraine’s neighbour Belarus for the exercises that started on Thursday.

Russia and Belarus launched joint military drills on Thursday that heightened tensions and added urgency to diplomatic efforts by NATO leaders to avert a feared invasion of Ukraine.

The war games, set to run until February 20, are the latest point of contention between Russia and the West over Ukraine. Kyiv quickly denounced the manoeuvres as “psychological pressure”.

NATO Secretary General Jens Stoltenberg said the build up was “a dangerous moment for European security”.

Western leaders have been warning for weeks that Russia could be preparing to escalate an eight-year separatist conflict in east Ukraine after building up of some 1,00,000 troops around the former Soviet state.

The United States has said Russia is also dispatching some 30,000 troops to Ukraine’s neighbour Belarus for the exercises that started on Thursday.

Columns of Russian missile systems rolled across snow-carpeted fields on the eve of the start of the drills in footage released by the Defence Ministry.

Russia has also sent six warship through the Bosphorus for naval drills on the Black Sea and the neighbouring Sea of Azov.

Kyiv denounced their presence as “unprecedented” attempt to cut off Ukraine for both seas.

Moscow and Minsk have not disclosed how many troops are taking part in the military exercises in Belarus.

“The objective of the exercises is to practise suppressing and repelling external aggression with a defensive operation,” the Russian Defence Ministry said in a statement.

Answering Western concerns, the Kremlin has insisted the Russian troops in Belarus will go home after the exercises.

But Ukraine’s President Volodymyr Zelensky said “the accumulation of forces at the border is psychological pressure from our neighbours”.

Kyiv has launched its own military drills expected to mirror Russia’s games in Belarus, but officials have said little about them out apparent fear of escalating tensions.

The diplomatic crisis has spurred weeks of talks between Russian, Western and Ukrainian officials.

Those efforts have drawn cautious optimism for negotiated solution, with French President Emmanuel Macron saying he had secured a pledge from Russian leader Vladimir Putin that Moscow “would not be the source of an escalation”.

Russia has put sweeping security demands to the United States and the Washington-led NATO military alliance with the aim of reducing their role in eastern Europe and former Soviet states.

Britain’s Ms. Truss was the latest Western diplomat to travel to Moscow to sound on Russia’s latest stance.

“There is an alternative route, a diplomatic route that avoids conflict and bloodshed,” she said. “I am here to urge Russia to take that path”.

Mr. Lavrov replied that Western threats towards Moscow would do nothing to ease tensions over Ukraine.

“Ideological approaches, ultimatums, threats — this is the road to nowhere,” Mr. Lavrov said.

Ms. Truss’s trip comes just days after Macron conducted a round of shuttle diplomacy between Moscow and Kyiv, and then briefed German Chancellor Olaf Scholz about his progress in Berlin.

The German chancellor will travel to Kyiv and Moscow next week for separate meetings with the Ukrainian and Russian leaders, including his first in person meeting with Putin.

Mr. Scholz is due to meet Baltic leaders in Berlin on Thursday. British Prime Minister Boris Johnson will meanwhile meet with NATO officials before travelling to Warsaw to hold talks with Polish President Andrzej Duda.

Pentagon spokesman John Kirby warned on Wednesday that Putin has continued sending troops to the border.

The United States has been sending a steady supply of ammunition to Ukraine, delivering its tenth shipment by a military cargo jet on Wednesday night.

Ukrainian officials have used more cautious language to describe the immediacy of the threat of the Russian build-up.

Deputy Defence Minister Ganna Malyar said Wednesday the Russian forces on the frontier were being used primarily “for political pressure and blackmail”.

Fighting between Kyiv’s army and Russian-backed separatists who control parts of two breakaway regions has claimed more than 14,000 lives since breaking out in 2014.

It began weeks after Russia annexed Ukraine’s Crimea peninsula, sparking a wave of economic penalties from the West, which the United States and the European have said they will expand if Russia escalates again.