Hong Kong protests: Before the mass street protests, the tear gas and the clashes with police, there was a romantic gateway that turned deadly. 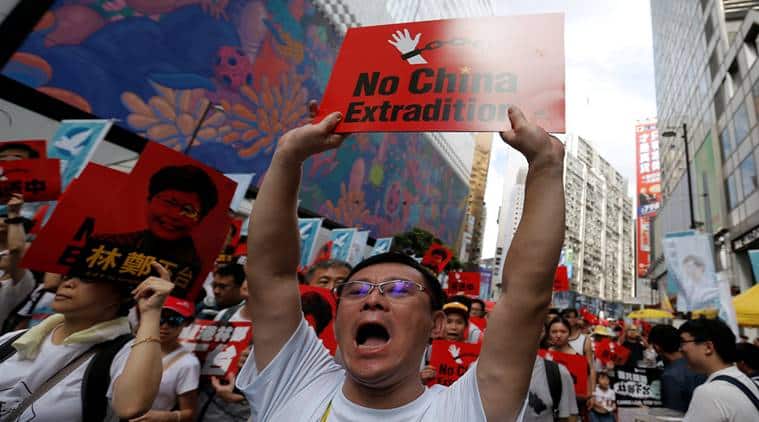 Written by Daniel Victor and Tiffany May (Keith Bradsher contributed reporting from Hong Kong, and Chris Horton from Taipei, Taiwan.)

Before the mass street protests, the tear gas and the clashes with police, before the government went all out for legislation that could threaten Hong Kong’s special status in China, and then abruptly backed down, a pregnant young woman went on a romantic getaway to Taiwan.

Poon Hiu-wing, 20, never returned to Hong Kong from that Valentine’s Day trip last year, but her boyfriend, Chan Tong-kai, 19, did. He would later tell Hong Kong police that he had strangled her, stuffed her body in a suitcase and dumped it in a thicket of bushes near a subway station in Taipei.

It was just a local crime story at first, the details dribbling out in the tabloid press: a selfie of the couple on Facebook, grainy security camera footage, the circumstances of their last argument.

Then this past February, nearly a year after Chan’s arrest, the Hong Kong government cited the case to propose legislation that would allow the city to transfer criminal suspects to Taiwan and other places with which it lacks an extradition treaty — including mainland China.

Seizing on the sensational crime as Exhibit A in a rushed campaign to push through the measure, Hong Kong’s chief executive, Carrie Lam, and her superiors in the Chinese leadership seemed confident they had a winning strategy.

As it turned out, they badly underestimated public fear and suspicion of Beijing’s encroachment on this semiautonomous former British colony. The gambit provoked one of Hong Kong’s largest protests in decades while also revitalizing the territory’s beleaguered pro-democracy opposition.

In a rare retreat for President Xi Jinping’s hard-line government, Lam finally yielded to the pressure Saturday, suspending her push for the legislation while resisting demands to withdraw it completely and resign.

From the start, critics labeled the extradition plan a “Trojan horse” that would allow Beijing to target political dissidents and others in Hong Kong who ran afoul of party officials.

As popular outrage spread, Lam and her allies stuck to the script, arguing that Hong Kong needed the bill to bring Chan to justice — even after the authorities in Taiwan made clear that was not true. Taiwanese officials said as early as May that they would not seek Chan’s extradition under the proposed legislation.

Their objection echoed that of the people of Hong Kong: The courts and security forces in mainland China, all controlled by the ruling Communist Party, could not be trusted.

Lam’s repeated invocation of the Poon family’s grief was seen as just “political opportunism at its worst,” said Dennis Kwok, an opposition lawmaker. 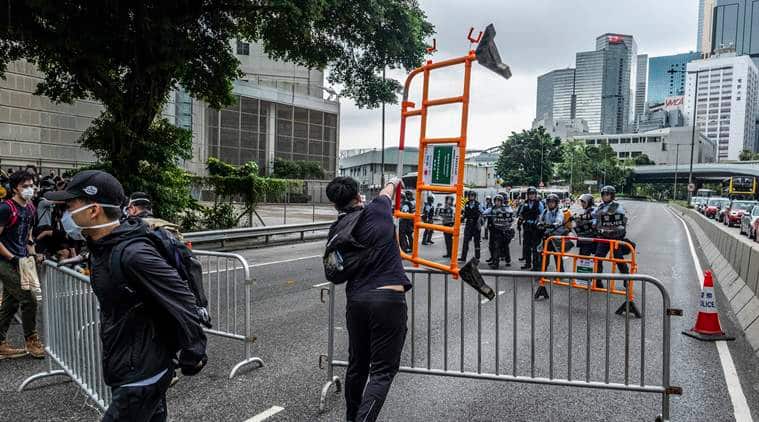 Poon had taken cooking and beautician courses. Chan was studying business. They met in July 2017 while working part time at a shop.

Before the couple set off for Taiwan last year, she gushed on Facebook, “He said I am his first and last girlfriend.”

They spent Valentine’s Day together in Taipei, Taiwan’s capital, but two days later had a fight that stretched into the early morning.

Poon had bought a pink suitcase at one of Taipei’s famed night markets, and they argued about how their luggage should be packed, Chan would later tell investigators, according to The South China Morning Post.

Then, according to the account he provided the police, Poon revealed that an ex-boyfriend was the father of the child she was pregnant with, and showed Chan a video of her having sex with another man.

In a rage, Chan hit her head against a wall, struggled with her on the floor of their hotel room for about 10 minutes and strangled her, he said. He stuffed her body into a suitcase and went to sleep.

When Poon failed to return home, her father started a frantic search. Chan told him the couple had had an argument and “went our separate ways,” according to Taiwan News. The police in Hong Kong questioned Chan, and he told them the same.

But then authorities in Taiwan pulled surveillance footage that showed Chan struggling to drag a pink suitcase out of their hotel.

Police detectives in Hong Kong questioned him again. This time, he confessed and disclosed the location of her body, a field near the Zhuwei train station on the northern outskirts of Taipei. The police found it that night.

But the Hong Kong police could not charge Chan with murder for a crime committed in Taiwan. Instead, he was held and eventually convicted on money laundering charges for using Poon’s credit cards after her death.

In April, a court in Hong Kong sentenced him to 29 months in prison. With time served while awaiting trial and good behavior, he could be released as soon as October.

An autopsy indicated Poon had been four to five months pregnant. 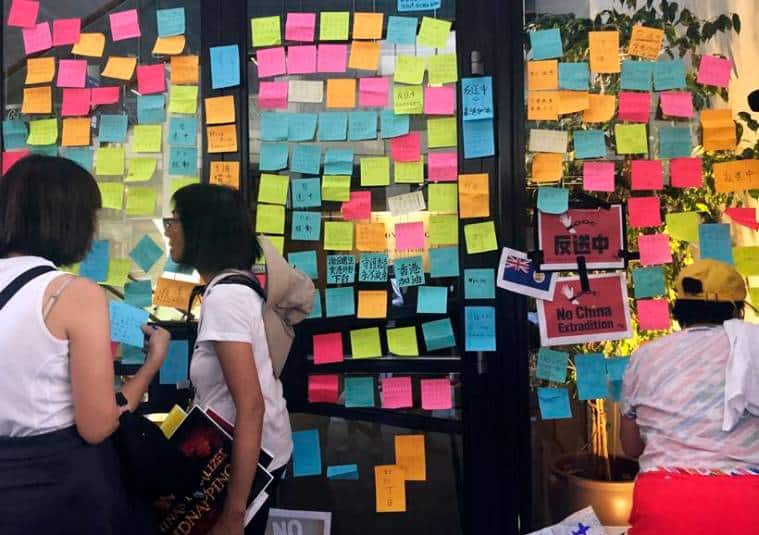 Violent crime is relatively rare in Hong Kong and Taiwan, and the case received extensive coverage by local news outlets when Chan was first arrested.

Some reports noted it might be difficult to prosecute him on murder charges because of international red tape, but for months, there was no sign the case would be at the center of an international dispute.

Then, in December, prosecutors in Taiwan obtained an arrest warrant for Chan.

The government said it had reached out three times to authorities in Hong Kong to discuss how he might be extradited. All three requests went unanswered, according to Chiu Chui-cheng, a deputy minister of Taiwan’s Mainland Affairs Council, the agency responsible for policy toward China.

There were two interrelated problems: China does not recognize the government of Taiwan, which it considers part of its territory. And Hong Kong, which returned to Chinese rule in 1997, does not have an extradition agreement with Taiwan.

Two months later, just before the anniversary of Poon’s killing, Lam made her move.

Her government submitted papers to Hong Kong’s Legislative Council that cited the killing in proposing legislation that would allow extraditions on a “case-by-case” basis to jurisdictions with which Hong Kong lacks a formal extradition agreement.

The plan covered Taiwan — but also mainland China. And that was a big deal.

Hong Kong had never allowed extraditions to mainland China — a safeguard agreed upon when Britain returned the territory and Beijing promised it a high degree of autonomy. (The measure prohibits extradition to any part of China, which complicates any deal with Taiwan because of Beijing’s claim of sovereignty over the democratic, self-governing island.)

And yet Lam sought to sidestep the legislature’s regular committee process and put the proposal on a fast track with an unusually short 20-day public review.

“The parents of the victim have not stopped writing letters to the government,” Lam told reporters, according to Hong Kong Free Press. “There were five addressed to me. They were still writing this January. If you have read these letters from Mr. and Mrs. Poon, you would also feel that we must try to help them.” 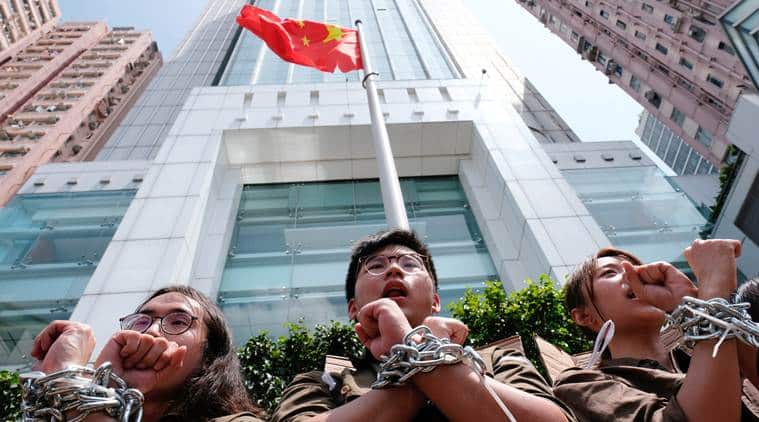 She added, “If we act too carefully, and slowly consult society or issue consultation papers, then I am afraid we would not be able to help with this special case.”

Appearing at a news conference in February in sunglasses, a mask and a baseball hat, Poon’s mother urged action, too.

“I cannot sleep at night,” she said. “The only way I can help my daughter is to help her get justice.”

But the effort to focus discussion on Poon’s killing soon fell apart as critics raised an alarm about the introduction of extraditions to mainland China — and asked why a more limited arrangement could not be worked out for Taiwan alone or even just in Chan’s case.

Opposition built steadily. Thousands attended a protest against the measure in March, and in April, tens of thousands rallied against it outside the Legislative Council. Lawmakers arguing about the bill scuffled in the legislature; one was carried out on a stretcher.

Lam, a career servant who was installed by Beijing in 2017, assured the public that the legislation would not apply to political crimes. But even within her insular council of advisers — like herself, unelected — there was unease. The territory’s top finance officials, for example, were dismayed when they learned the bill would also allow Beijing to begin requesting freezes on assets in Hong Kong.

Then in May, Taiwan dramatically undercut Lam’s argument by declaring it would not seek Chan’s extradition even if the bill passed.

“Without the removal of threats to the personal safety of nationals going to or living in Hong Kong caused by being extradited to mainland China,” said Chiu, the deputy minister, “we will not agree to the case-by-case transfer proposed by the Hong Kong authorities.” ‘It Is The Right Thing to Do’

Lam has said she decided to pursue the extradition law herself, without prodding from Xi or other Chinese leaders. But China’s propaganda outlets took a hard line against the protesters, accusing them of conspiring with China’s enemies abroad, and several senior Communist Party officials in Beijing endorsed the legislation.

That helped transform the debate into a broader fight over the erosion of civil liberties under Chinese rule — and Hong Kong’s future as a global financial center.

For five years, since the failure of the Umbrella Movement demanding free elections, Hong Kong’s pro-democracy opposition had been on the defensive. But the extradition bill gave it a chance to rally the public against something easy to understand: the possibility of being arrested and sent to mainland China.

On Friday, Lam quietly traveled across the border to the mainland city of Shenzhen, where she consulted with senior Chinese officials. Some had flown in from Beijing, and a few of the party’s top experts on Hong Kong were there, too. (Xi was out of the country, celebrating his birthday with President Vladimir Putin of Russia at a regional summit in Tajikistan.)

There was a consensus: Given the public’s reaction, Lam should delay the legislation indefinitely.

Announcing the decision on Saturday, she raised Chan’s case again in defending the measure but finally acknowledged that Taiwan’s position meant there was no rush to pass it. “We will adopt the most sincere and humble attitude to accept criticisms and make improvements,” she said.

BL Awards 2020: Delhi Crime, The Final Call, The Family Man – VOTE for the Web Series with the Best Script | Bollywood Life
We and our partners use cookies on this site to improve our service, perform analytics, personalize advertising, measure advertising performance, and remember website preferences.Ok