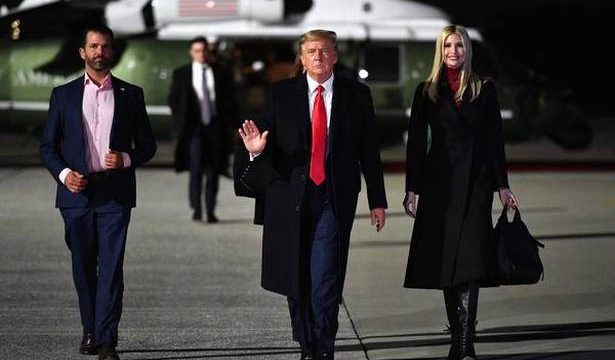 Lawyers for the Trumps filed court papers on the evening of January 3 seeking to block the subpoenas, calling them “an unprecedented and unconstitutional maneuver”

The New York attorney general’s office confirmed on January 3 that it has subpoenaed former President Donald Trump and his two eldest children, Ivanka and Donald Trump Jr., demanding their testimony in an investigation into the family’s business practices.

Attorney General Letitia James’ office said in a court filing that it recently issued subpoenas seeking testimony and documents from the Trumps as part of a yearslong civil probe involving matters including “the valuation of properties owned or controlled” by Trump and his company.

January 3 filing, made public as Ms. James went to court in a bid to enforce the subpoena, was the first time that investigators publicly disclosed that they are also seeking information from Ivanka and Donald Trump Jr., both trusted allies of their father who’ve been executives in his family’s Trump Organization.

Last month, it was reported that Ms. James’ office had requested Mr. Trump sit for a deposition.

Lawyers for the Trumps filed court papers on the evening of January 3 seeking to block the subpoenas, calling them “an unprecedented and unconstitutional maneuver” and accusing James of attempting to obtain testimony that could then be used against the Trumps in a parallel criminal investigation being overseen by Manhattan District Attorney Alvin Bragg.

Ms. James “seeks to circumvent the entire grand jury process” and nullify the Trumps’ rights by forcing them to testify without the immunity that’s guaranteed under state law if they were subpoenaed to testify in front of the grand jury in the criminal probe, the Trumps’ lawyers wrote.

Ms. James, a Democrat, has spent more than two years looking at whether the Trump Organization misled banks or tax officials about the value of assets — inflating them to gain favorable loan terms or minimizing them to reap tax savings.

“Despite their names, they must play by the same rules as everyone else. These delay tactics will not stop us from following the facts or the law, which is why we will be asking the court to compel Donald Trump, Donald Trump Jr., and Ivanka Trump to testify with our office under oath,” Ms. James said in a statement after the Trumps’ move to block the subpoenas.

The dispute over the subpoenas had played out in secret until January 3, when a judge who had handled other subpoena fights arising from the Trump investigation agreed to entertain arguments over the new subpoenas. The court filing from Ms. James’ office was then posted to the public court docket.

The judge, Arthur Engoron, previously sided with Ms. James on other matters relating to the probe, including making another Trump son, Trump Organization executive Eric Trump, testify after his lawyers abruptly canceled a scheduled deposition.

Last month, Mr. Trump sued Ms. James in federal court, seeking to put an end to her investigation. Mr. Trump, in the lawsuit, claimed that the attorney general had violated the Republican’s constitutional rights in a “thinly-veiled effort to publicly malign Trump and his associates.”

In the past, the Republican ex-president has decried Ms. James’ investigation as part of a “witch hunt" along with a parallel criminal probe being run by the Manhattan district attorney’s office.

Although Ms. James’ civil investigation is separate from the criminal investigation, her office has been involved in both, dispatching several lawyers to work side-by-side with prosecutors from the Manhattan D.A.’s office.

Before he left office last week, Mr. Vance convened a new grand jury to hear evidence in the investigation, but left the decision on additional charges to his successor, Mr. Bragg. The new district attorney has said he’ll be directly involved in the Trump matter while also retaining the two veteran prosecutors who led the case under Mr. Vance.

Mr. Weisselberg pleaded not guilty to charges alleging he and the company evaded taxes on lucrative fringe benefits paid to executives.

Mr. Trump has been subpoenaed before, testifying in October in a deposition for a lawsuit brought by protesters who say his security team roughed them up early in his presidential campaign in 2015. Some presidents were subject to subpoena while in office, including Richard Nixon in 1974 for his infamous Watergate recordings.

Still, it’s exceedingly rare for law enforcement agencies to issue a civil subpoena for testimony from a person who is also the subject of a related criminal investigation.

That’s partly because the person under criminal investigation could simply cite their Fifth Amendment right to remain silent. It is unlikely that Trump’s lawyers would allow him to be deposed unless they were sure his testimony couldn’t be used against him in a criminal case.

Both investigations are at least partly related to allegations made in news reports and by Mr. Trump’s former personal lawyer, Michael Cohen, that Trump had a history of misrepresenting the value of assets.

Ms. James’ office issued subpoenas to local governments as part of the civil probe for records pertaining to the estate, Seven Springs, and a tax benefit Trump received for placing land into a conservation trust. Vance later issued subpoenas seeking many of the same records.

Ms. James’ office has also been looking at similar issues relating to a Trump office building in New York City, a hotel in Chicago and a golf course near Los Angeles.