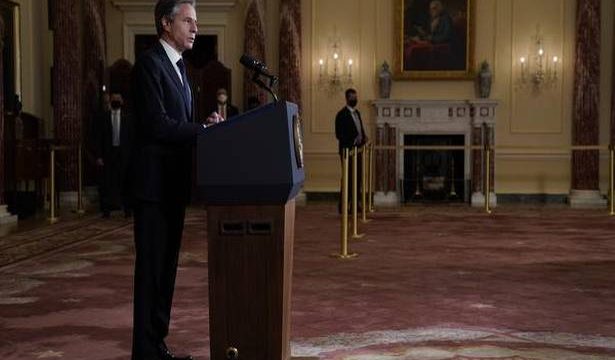 The two leaders spoke on Friday. It was the first conversation between the top officials since President Joe Biden took office on January 20.

The US will hold China accountable for its abuses of the international system, US Secretary of State Antony Blinken has said as he spoke to his Chinese counterpart Yang Jiechi and raised with him the issue of human rights violations in Xinjiang, Tibet and Hong Kong.

The two leaders spoke on Friday. It was the first conversation between the top officials since President Joe Biden took office on January 20.

“Secretary Blinken stressed the United States will continue to stand up for human rights and democratic values, including in Xinjiang, Tibet, and Hong Kong, and pressed China to join the international community in condemning the military coup in Burma (Myanmar),” State Department Spokesperson Ned Price said in a readout of the call.

In recent years, China has faced severe criticism from western countries over human rights violations in Tibet and persistent reports of the mass detention of Uighurs and other minorities in Xinjiang.

China has also ramped up a crackdown in Hong Kong after imposing a new law against subversion following major protests in the city.

During the call, Blinken reaffirmed that the United States will work together with its allies and partners in defence of their shared values and interests to hold China accountable for its efforts to threaten stability in the Indo-Pacific, including across the Taiwan Strait, and its undermining of the rules-based international system, Price said.

"In my call with my counterpart in Beijing,…. I made clear the US will defend our national interests, stand up for our democratic values, and hold Beijing accountable for its abuses of the international system," Blinken tweeted.

China claims almost all of the 1.3 million square-mile South China Sea as its sovereign territory. China has been building military bases on artificial islands in the region also claimed by Brunei, Malaysia, the Philippines, Taiwan and Vietnam.

After being sworn in as the Secretary of State, Blinken has spoken over the phone with nearly 30 of his counterparts from various parts of the world.

Blinken spoke with External Affairs Minister S Jaishankar on January 29, during which the two leaders reaffirmed the growing bilateral partnership between the two countries.